Now, decades before becoming New To Las Vegas, I lived in Park Slope, the very next neighborhood to the east of Carroll Gardens. I know the area well but wanted to see exactly how far away that was from my former abode. So I went to Google Maps and punched in the address listed in the indictment, 377 Union Street. Here’s the screenshot I got: 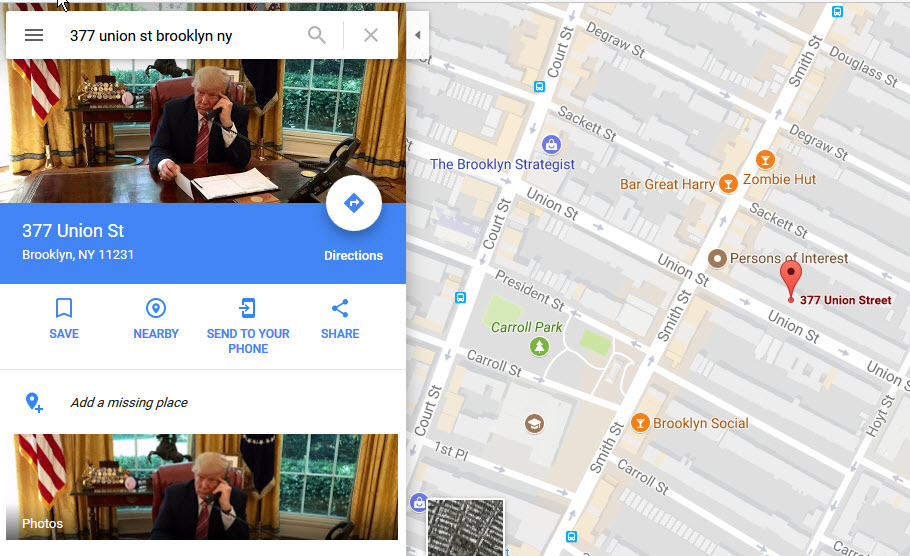 That’s right, folks. Someone today hacked Google Maps to insert a picture of President Donald J. Trump in the Oval Office in the spot where an image of Manafort’s house normally would appear.

If you take a very close look at the map. you’ll see there’s marker for “Persons of Interest” on the same block as the property. I think that is the name of a barber shop. But what a coincidence.

While I don’t especially approve of computer hacking, this is tooooooooo funny.

According to the indictment signed by special counsel Robert Mueller, Manafort bought the house for $3 million cash in 2012 from an entity he controlled on the Greek side of Cyprus. That’s an island nation in the Mediterranean with a sketchy banking system and, using the words of novelist W. Somerset Maugham describing Monaco, “a sunny place for shady people.”

The indictment also alleges that Manafort last year obtained a $5 million loan against the Brooklyn property by falsely telling the unidentified lender that much of the money would be used to fix up the property and make it more valuable. According to the indictment, Manafort instead used the money for other purposes.

While described in some detail, the dissembling over the purpose of the loan is not directly one of the 12 counts against Manafort. The more serious allegations involve failing to declaring foreign financial accounts, acting as an unregistered agent of a foreign power (the Ukraine, at times a Russian ally) and fibbing about this to the feds.

But it is claimed the Brooklyn property was bought with laundered money, and thus subject to forfeiture if Manafort is found guilty.

Trump, of course, has no financial interest in Manafort’s Brooklyn house. Which is why you can’t trust everything you see on the Internet and even Google Maps. Still, we’ll see if Trump tweets about this.