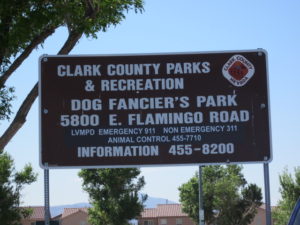 For all of its appeal to tourists, the Las Vegas area has a big problem. The serious crime rate is very high. The latest official FBI crime statistics, which can lag by up to two years, puts it at 849 incidents for every 100,000 residents. The national average is 373, so the Las Vegas rate is more than double.

Homicides are one component of serious crime (others include rape, robbery and aggravated assault). In 2017, the Las Vegas area had 199 homicides. That includes the 58 persons killed in the October 1 massacre along the Las Vegas Strip. By my rough reckoning, that works out to a local homicide rate of 10.0 for every 100,000 residents. The latest national average is 5.3, so the murder rate is almost double.

So far, this is all about humans. But I’m here to write about murders among dogs. Dog on dog crime, to be specific. At Dog Fancier’s Park, the off-leash dog park in East Las Vegas I visit regularly with my New To Las Vegas Basset Hound, I’m aware of at least two dogs in recent months who were murdered–yes, killed–by other dogs. Owners of victim and perp supposedly were nearby.

Now, the county-owned park, off E. Flamingo Rd. along S. Stephanie St., is quite large, maybe the biggest dog park in Clark County. Across its 12 acres there are five runs, running water, impressive stadium lighting for night-time visits (when summertime temperatures might be down to 100 degrees), poop bag dispenses and even bathrooms for humans. Walking around, Dog Fancier’s Park doesn’t seem like a dangerous place. Each day the facility draws hundreds of dogs, and their owners.

So statistically, maybe two killings aren’t so much. But it’s just one venue, covering 0.000002% of Clark County. Most of Las Vegas seems safe for humans–if it weren’t for those damn FBI statistics.

The first dog-murder case I heard about was on a late-afternoon day in the fall. It involved two families that were friends and three animals, a Chihuahua owned by one family and a pair of Pit Bulls owned by the other. The Chihuahua, as the breed is sometimes wont to do, started barking in the face of one of the Pit Bulls. At some point, the Pit Bull lunged–as that breed is sometimes wont to do–grabbed the Chihuahua’s head in its mouth and started shaking. The other Pit Bull may also have latched onto the Chihuahua’s body.

The families quickly left the park carting the corpus delectiÂ and the two suspects. I spoke with a witness less than a hour later who described the incident in detail. The witness was still shaken from what he had seen.

The second dog-murder case I heard about, maybe a month later, was similar, with a barking Chihuahua, except that it involved only one Pit Bull. The outcome, though, was the same: a dead Chihuahua. My informant was someone who had witnessed the incident a day or two earlier.

I have no idea if anyone made a complaint to animal control authorities in either case about a vicious dog. But I was told that a complaint actually was lodged over another incident at Dog Fancier’s Park in which a dog owner–a human–actually killed a dog.

As I heard the story, the owner was unhappy when his dog was mounted by a suitor. So rather than pull the dog off, the owner delivered a hard kick to its head. It’s possible the owner then delivered a second kick after the dog went down. The owner then hurried off with his dog, backing his vehicle out of the parking lot so it would be harder to see the license plate. But there were witnesses with cellphone cameras who got the tag, and they contacted authorities.

The injured dog was still alive but had to be put down a few days later as a result of the incident. Self defense or excessive force? I don’t know what became of the complaint.

It is an article of faith among dog owners that the conduct of dogs–other persons’ dogs, at least–reflects more the character of the owner rather than the nature of the breed. If that’s true, then I probably shouldn’t be surprised at some of the goings-on at Dog Fancier’s Park in Las Vegas.

UPDATE ON APRIL 16, 2018: Another fatal dog on dog attack in Dog Fancier’s Park prompted TV coverage tonight. Click here for the segment on KLAS-TV, Channel 8, which at the very beginning (after the ad) features a very brief cameo appearance by the New To Las Vegas Basset Hound and me. Click here for another report on KTNV-TV, Channel 13.

William P. Barrett: Howard, Thanks....
Howard Beckerman: Well written and well thought. Losers always blame somebody else....
William P. Barrett: Thanks, whoever you are!...
: Bravo Bill!...
: Jason called today from "717-589-3240" Of course I am on the Do Not Call List....
William P. Barrett: Edelacruz, I imagine the wait will last a while longer....
Edelacruz: Thanks for article as a long life resident of Roswell there was some interest before social media and cell phones or pcâ...
Don Douglas: I applaud your scholarship and writing; and I am always looking to learn. I do wonder if you intended to place blame...
michael reid hunter: I have been called by Andrew at least 4 times a week for the past year, always different numbers, and I can tell what's ...
: Some useful terminology to deal with these spammers They are pronounced as they read: Chootiya bakrichod = stupid goat...
William P. Barrett: Anonymous, you caught her name, which is better than I did....
: Just got a call from "Stephanie". I asked how an initiative was funded. She got very nervous, went back to er script. ...
William P. Barrett: Bruce, I certainly can understand someone making a connection between a barrel used in a crime and a missing person name...
Bruce Nichols: Hi Bill: As always, informatively encyclopedic and fun to read. My first thought was Judge Crater, although I Googled hi...
William P. Barrett: Jeff, it actually probably was soundboard technology rather than AI. I have been advised that AI is not quite that good,...
Jeff: Thank you for your article. I am interested in political advocacy for Autistic people, so I actually considered giving....
William P. Barrett: Billy Jack, spoofed caller IDs is part of the m.o....
: Where does Mr. Ahakuelo and his wife live today? Where is he employed? Still in Las Vegas Iâ€™m sure?...
Billy Jack: I just got another. Caller ID showed it was from "ST JOSEPH HEALTH". When asked how I was doing, my response was "Wh...
William P. Barrett: Billy Jack, speaking of TV shows, I know some recipient of these calls who simply put the phone down in front of a TV se...
Billy Jack: I have been getting those lately, too. However, I just respond with "That is none of your business" to their questions ...
William P. Barrett: Edward J. Donaghy, no shortage of material on scam fundraisers. Good luck with your research....
Edward J Donaghy: FOUND YOU WHILE RESEACHING SCAM FUNDRAISERS...breast cancer, firefighters, et al. Wonderful work.I liked the bark scorpi...
William P. Barrett: Deby, scroll through the comments and you'll see some clever advice on how to handle this. Good luck....
Deby: I get this call 5-7 times daily all from different numbers and it cannot be stopped. I have told them my number is on th...
William P. Barrett: A big part of the problem is cops not willing to call out cops....
: I just got two calls from the Robotic Andrew Redlow.... The computer generated sentence fragments goes back to " can we...
William P. Barrett: Pat, it's hard not to be negative about a war criminal....
Pat: The Author's vocabulary is Easy to read, excellent wording, & he held my interest throughout. BUT, he is so very ...
William P. Barrett: Ed, not that I'm aware of. But that could make for an interesting controversy....