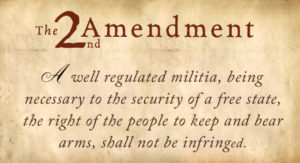 Every time there’s a mass shooting–like the one just a few miles from my New to Las Vegas home in October that claimed 58 lives, or the Valentine Day incident last month in a Parkland, Fla., school that killed 17–a national debate breaks out over gun rights and the Second Amendment to the U.S. Constitution. The powerful National Rifle Association claims folks have a largely unfettered right under that amendment to pack heat. Majority public opinion seems to be something else, but most politicians up to and including President Trump are too afraid of the NRA’s campaign contribution money to do anything substantive.

So allow me to throw another log onto this fire. As I read our country’s history, people who defend the Second Amendment are actually defending a provision attached to the U.S. Constitution that was worded to make it easier for Southern states to preserve slavery. That’s right, slavery. The “well-regulated militia” phrase so famously found in the amendment, just before the equally famous “right of the people to keep and bear arms,” was a reference to officially organized whites-only posses in the South created for the purpose of keeping in line black slaves, who in many places outnumbered the whites.

Southern politicians were afraid of the nascent Federal Government, soon to be dominated by Northern anti-slavery interests. They specifically were worried southern states would be prohibited by federal authorities from continuing to have militias that could rummage through slave quarters without warrants and, I suppose, shoot black folks who got out of line.

For background, I am relying on several sources and a certain amount of supposition. By far the most accessible material on this subject is a lengthy 1998 article by law professor Carl T. Bogus (yep, that’s his real last name) in the University of California, Davis, Law Review, entitled, “The Hidden History of the Second Amendment.” You can download a copy by clicking here. For a law review article, it’s pretty readable by non-lawyers.

As drafted in Philadelphia and sent to individual states for ratification in 1787, the Constitution contained no provision at all on the right to keep and bear arms. But it had plenty of provisions bearing on militias–state-created part-time armies–and slavery. Article 1 Section 8 gave Congress plenary power to set rules for governing militias and calling them up. Article 2 Section 1 put the President of the U.S. in charge of militias when in federal service. There actually wasn’t much authority given to the states beyond the right to choose militia officers and train its members according to federal standards.

The word “slave” or “slavery” deliberately did not appear in the Constitution. But assorted provisions permitted the practice. Article 1 Section 9 allowed the slave kidnapping trade from Africa (benignly called “importation of such persons as any of the states now existing shall think proper to admit”) to continue for at least another 20 years. The Federal Government could collect a tax on each new slave of up to $10 a head ($245 in today’s dollars).

Article 4 Section 2 prohibited Northern states from freeing an escaped slave (called a “person held to service or labor in one state”) while requiring return of such a fugitive to the slave’s owner. Article 1 Section 2 allowed Southern states to count 60% of slaves (euphemistically styled “other persons”) when determining representation in the House of Representatives, giving those state more seats–although, of course, those slaves couldn’t vote.

Remember, we’re talking about a document whose preface paradoxically proclaimed a goal of securing “the blessings of liberty.”

All these provisions were part of a compromise among the 13 states to get approval of the draft Constitution by nine, the minimum needed for ratification. But the ratification process was stalled at eight–not every state wanted to chuck the weak-central-government Articles of Confederation, under which the country had been operating since 1781–when Virginia chose 173 delegates who gathered in Richmond in 1788 to deliberate and vote.

Patrick Henry–the slave-owning ex-governor best known now for his stirring pre-Revolutionary War battle cry, “Give me liberty or give me death!”–warned the assembly that the proposed Constitution gave Congress all the real authority over militias. George Mason, another prominent delegate who owned slaves (but said he was against slavery), said the feds could order the Virginia militia into a far-away state and leave Virginia unprotected. Even worse, Mason said, the feds could order the disarming of the Virginia militia. Mason had refused to sign the draft Constitution.

Professor Bogus argued that this was all coded language for a fear that Virginia could be left defenseless against slave uprisings.

In Virginia and other Southern states, the duties of militias including operating slave patrols, armed groups of white males who made regular patrols. “The patrols made sure that blacks were not wandering where they did not belong, gathering in groups or engaging in other suspicious activity,” Bogus wrote. “Equally important, however, was the demonstration of constant vigilance and armed force. The basic strategy was to ensure and impress upon the slaves that white were armed, watchful and ready to respond to insurrectionist activity at all times.”

Against this backdrop, Henry became even blunter by suggesting that the Federal Government under its power to provide for the general defense could enlist slaves in a federal army and then emancipate them. “May they (the federal government) not pronounce all slaves free, and will they not be warranted by that power?” he asked.

The Richmond delegates formally suggested a long “Declaration of Rights” for the new constitution, including one holding “that the people have a right to keep and bear arms.” Such language was not revolutionary; the English Declaration of Rights of 1689 contained a similar provision. But a bill of rights Virginia had adopted in 1776 did not contain that wording. However, in the context of the looming Constitution and the perceived need to preserve slavery, it became an imperative.

In 1789, Madison was elected to the U.S. House of Representatives in the First Congress (defeating James Monroe, another future U.S. President), and resolved to make good on his promises to his fellow Richmond Convention delegates. In pertinent part he initially proposed this language as a constitutional amendment, “The right of the people to keep and bear arms shall not be infringed; a well armed, and well regulated militia being the best security of a free country.” The wording seemed to meet Patrick Henry’s concerns about free whites being defenseless against agitated black slaves.

By the time what became the Second Amendment emerged from Congress and was sent to the states for ratification, “free country” had been changed to “free state.” The syntax had been reversed and boiled down to a single 27-word sentence: “A well regulated militia, being necessary to the security of a free state, the right of the people to keep and bear arms shall not be infringed.”

There isn’t a lot of legislative history explaining the rationale behind the wording changes, especially how “free country” became “free state,” although that, too, might be evidence of that Southern state slave revolt fear. Overall, Professor Bogus said the final version squared with the spirit that allowed anti-slavery Northern states and pro-slavery Southern states to agree on a governing document that tolerated the odious practice. “In effect,” he wrote, “Madison proposed that the slavery compromise be supplemented by another constitutional provision prohibiting Congress from emasculation the South’s primary instrument of slave control, and Congress acceded to that request.” The Second Amendment took effect in 1791.

Now, the post-Civil War ratification of the 13th Amendment in 1865 ending slavery (except as a punishment for crime, the main reason convicted prisoners today can be forced to make license plates) served in effect to repeal a number of other slavery-linked constitutional provisions. These included the fugitive slave clause in Article 4 and the slaves-count-as-three-fifths provision for Congressional representation in Article 1.

So if the Second Amendment was intended to support slavery, how about someone arguing in an appropriate court case that it, too, was repealed sub silentio by the 13th Amendment, and no longer in force?

That’s yet another log on the fire from me.

Marina Teramond @ NMPL: I have known that Donald Trump filed a lawsuit for recognition of his election victory but I wasn’t aware of the decis...
JO: I would get the calls daily. then one day I went through he whole pitch and gave them my address to the local FBI field ...
Joanne Gmerek: As always, lots of rock solid evidence that speaks for itself. If only Trump and his supporters read…...
William P. Barrett: Some Dude, the folks running these faux charity PACs feel pretty protected, because the law is so toothless and the regu...
Some Dude: Veterans Crisis Relief Fund PAC, keeps calling grandparents saying for them to honor a pledge. The amount of that ple...
Tom: Wast there time let them send a salesman to your home then tell that salesman that you are on the do not call list thank...
William P. Barrett: Jerry, getting vaccinated certainly makes sense to me, as do other measures, like masking and social distancing. I would...
Jerry: Sounds like fear mongering to me. Las Vegas also hosts 40 million visitors, maybe less during this pandemic. The vaccine...
William P. Barrett: Barbara, thanks....
Barbara Evans: Thoughtful piece, Bill. Your legal education helped with explanations in that area, too. Good combination of your know...
William P. Barrett: Janet, you're welcome....
William P. Barrett: Thanks, Bruce....
Bruce Nichols: Awful saga well told, Bill....
Janet Gorkin: Very interesting article!! Thank you for the depth you have brought to this story!!...
Mick: I finally got a call from Jason, I told him to go F@,kK himself, and he started stammering, and stuttering like Max Head...
William P. Barrett: Martha Roberson, I have seen no data suggesting the rate of Guillain-Barre syndrome is higher in Las Vegas than in other...
Martha Roberson: Those who can be vaccinated please do. There are a few Las Vegas persons who cannot be vaccinated because they have a n...
William P. Barrett: Joanne, just reporting on the data, and trying to hang in there. You can be sure I am masked when out and about. Didn't ...
Joanne Gmerek (formerly Rose): Well. You're just a fountain of good news for the Las Vegas folks, Bill. I trust you are well and staying masked in th...
Ren: We are getting these calls on our home phone( we use Magic Jack) several X a week... as soon as it shows a V, 99% chance...
Annoyed as s--t: Sick of this s--t from these robo callers. I read tho, be very careful not to give any personal information. Even saying...
Gary: I get calls from these morons several times a week so this afternoon I waited for the "supervisor" and when he asked how...
Anonymous: I have stopped a few of these callers with a simple question. As soon as I get a person on the line I ask " Did his hea...
William P. Barrett: Scott Smith, OK, but who is hiring them?...
Scott Smith: "Greg", or whatever name is being used, is from India. Note that due to the hatred between India and Pakistan over inde...
Sarah: Jason keeps calling my handicapped MINOR sons cell phone!!!! I have repeatedly asked for it to be stopped. As soon as I ...
No one important: We can put men on the moon but we can't stop Jason....
William P. Barrett: Mollie, as I wrote, "Anna" isn't very smart....
Mollie: Anna called me today - I went along with the call just to be a good sport, but after asking if i could make the donation...
John S: Mike who said "Well, that was surprisingly wordy, yet worthless!"--Don't be a d**k!...