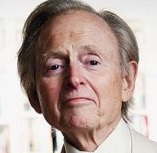 Tom Wolfe (via National Endowment for the Humanities)

Some of the tributes to Tom Wolfe, the famously cutting New Journalism wordsmith who died last week at age 88, made reference to one of his earliest magazine efforts, a 1964 article for Esquire about a town arising in the Nevada desert called Las Vegas. As his obituary in The New York Times quoted–high up–one literary critic, “His prose style is normally shotgun baroque, sometimes edging over into machine-gun rococo, as in his article on Las Vegas which begins by repeating the word ‘hernia’ 57 times.”

I read that article years before becoming New To Las Vegas. After locating a copy this week, I counted. Indeed, the word “hernia” does appear exactly 57 times at the start.

Wolfe’s work is entitled “Las Vegas (What?) Las Vegas (Can’t Hear You! Too Noisy) Las Vegas!!!!” That might give you a sense of Wolfe’s overall take, which isn’t too complimentary. But his piece sure is a great read.

The story does not appear to be in the free public domain online. However, it can be found (and read for a fee) on the Esquire website and in several books, including a collection of Wolfe’s magazine works, The Kandy-Kolored Tangerine-Flake Streamline Baby (1965), and Literary Las Vegas: The Best Writing About America’s Most Fabulous City (1995).

In Wolfe’s telling, Las Vegas “takes what in American towns is but a quixotic inflammation of the senses for some poor salary mule in the brief interval between the flagstone rambler and the automatic elevator downtown and magnifies it, foliates it, embellishes it into an institution.” The main lure of Las Vegas is for older folks. “No one in Las Vegas will admit it–it is not the modern, glamorous notion,” he writes,”–but Las Vegas is a resort for old people. In those last years, before the tissue deteriorates and the wires of the cerebral cortex hang in the skull like a clump of dried seaweed, they are seeking liberation.”

Wolfe describes a Vegas before high-rise buildings. “Las Vegas is the only town in the world whose skyline is made up neither of buildings, like New York, nor of trees, like Wilbraham, Massachusetts, but signs,” he writes. “One can look at Las Vegas from a mile away on Route 91 [Las Vegas Blvd., a/k/a The Strip] and see no buildings, no trees, only signs. But such signs! They tower. The revolve, they oscillate, they soar in shapes before which the existing vocabulary of art history is helpless.” Wolfe even interviews some of the sign-makers.

He goes on at some length about what he calls the prevalence of “the Las Vegas buttocks décolletage”–grown women and even local teenagers wearing bikini-style shorts that don’t completely cover the tush. Wolfe later asserts Las Vegas high schoolers have the highest venereal disease rate “anywhere north of the yaws-rotting shanty jungles of the Eighth Parallel,” which runs across the top of South America.

Wolfe give much credit to mobster Benjamin “Bugsy” Siegel. The writer calls him “the father of Las Vegas” and a man with “aesthetic, psychological and cultural insights, like Cézanne’s, Freud’s and Max Weber’s,” who moved the strip away from plans that “would have preserved the town with a kind of Colonial Williamsburg dinkiness in the motif of the Wild West.” Here is Wolfe’s description of Siegel’s epic creation, the Flamingo, built on a Miami theme in 1946:

Everyone drove out Route 91 just to gape. Such shapes! Boomerang Modern supports, Palette Curvilinear bars. Hot Shoppe Cantilever roofs and a scalloped swimming pool. Such colors! All the new electrochemical pastels of the Florida littoral: tangerine, broiling magenta, livid pink, incaradine, fuchsia demure, Congo ruby, methyl green, viridine, aquamarine, phenosafranine, incandescent orange,scarlet-fever  purple, cyanic blue, tessellated bronze, hospital-fruit-basket orange. And such signs! Two cylinders rose at either end of the Flamingo–eight stories high and covered from top to bottom with neon rings in the shape of bubbles that fizzed all eight stories up into the desert sky all night long like an illuminated whisky-soda tumbler filled to the brim with pink champagne.

Wolfe makes a comparison with another celebrated gambling mecca. “For the grand debut of Monte Carlo as a resort in 1879,” he writes, “the architect Charles Garnier designed an opera house for the Place du Casino; and Sarah Bernhardt read a symbolic poem. For the debut of Las Vegas as a resort in 1946 Bugsy Siegel hired Abbott and Costello, and there, in a way, you have it all.” Wolfe notes Siegel was assassinated by his mob backers in 1947.

The writer spends a lot of time watching gamblers–well, gamble. Besides Raymond, the hernia man, he describes poker-playing high-rollers at the Dunes “squinting at the pips … like Conrad Veidt … studying a code message from S.S. headquarters.” (Veidt played the Nazi heavy in the movie “Casablanca.”) Wolfe notes the many slot machines at the airport.

At the same time he describes a number of truly sad scenes. Blacks, he writes, “who have done much of the construction work in Las Vegas’s 16-year-boom are off in their ghetto on the west side of town.” The Clark County Courthouse has two padded cells for gamblers high on meds who need “three or four days” to calm down, after which they are released. Wolfe spends some time hanging around the county hospital (now University Medical Center), where, he writes, about 75% of the patients in the psychiatric ward get there from the Strip.

Similar to what I wrote in this space not too long ago, Wolfe disparages some of the local news media. He describes the hourly newscast on what he sarcastically calls “Las Vegas’ finest radio station, KORK” (now KBAD, with an all-sports format). It seems KORK branded its journalism as “Action Checkpoint News,” festooned with “a series of electronic wheeps out on that far edge of sound where only quadrupeds can hear,” followed by a one-sentence news bulletin and then “Urp! Wheep! Lulu!”