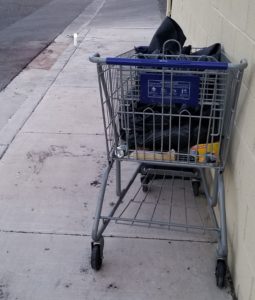 See updates at end of story

Walking the dog Friday morning before dawn on the year’s shortest day, I came across a grisly sight near the New To Las Vegas world headquarters: the body of a homeless man on the side of a deserted semi-commercial cul-de-sac. Blood coated the asphalt around him. Nearby: an overturned shopping cart containing his possessions.

I called 911, and Las Vegas Metro Police units quickly responded. The street was closed off for about 12 hours as ambulances, detectives, police photographers, coroner office personnel and eventually some kind of hazmat clean-up team worked the site. Officers confirmed to me–and to the Las Vegas news media–that the man had been stabbed multiple times with a knife, likely overnight some hours before I passed by. A murder investigation is underway.

This morning, a full two days later, I walked that block again with the dog. I observed several elements of note, all of which I documented in a photo I took that is nearby.

First, someone had put a memorial lit candle by the spot where I found the body.

Second, the hazmat team did such a poor job of cleaning that the victim’s blood was clearly visible in the street more than 48 hours later (that reddish rectangle to the left of the candle).

Finally, the victim’s meager possessions were still in the shopping cart, which had been righted and put on the sidewalk.

I am advised that it is official Metro policy to leave the belongings of deceased homeless folks where they are found if in a public place. Two officers told me Metro feels it doesn’t have the legal authority to take away stuff that isn’t evidence. Even putting aside the obvious lack of dignity and humanity, that’s ridiculous. Authorities surely can temporarily store such goods until the victim is identified, and any next-of-kin notified and given the chance to retrieve the possessions.

This is taking way too far the semi-official Las Vegas slogan, “What happens here, stays here.”

If a report on KVVU-TV, the Fox affiliate, is to be believed, the killer might have been asleep in a nearby dumpster when I found the body, and not discovered by the police who quickly responded. According to the report, one Jarrid Johnson, 25, walked in the county jail three days later and confessed to the crime. He was charged with murder with a deadly weapon. The homeless person victim was identified as Ralph Franzello. He reportedly caught Johnson going through his things, a fight ensued and Johnson repeated stabbed Franzello, quite possibly with the victim’s own knife.

A notice on a Las Vegas funeral home website says Franzello was 63 years old, two decades older than the original estimates in news account of a man in his 40s. No other details were given.

Nearly a week after KVVU-TV, citing a police report, identified the victim as Ralph Franzello, the Clark County Coroner’s Office confirmed the ID and ruled his death a homicide. Stated cause of death: “multiple sharp and blunt force injuries.” That certainly would account for all the blood I saw when I found the body. Meanwhile, according to the website of the Clark County Detention Center, Jarrid Johnson, the accused killer, remains jailed in lieu of $500,000 bail and has some kind of hearing scheduled for January 18.

William P. Barrett: You probably reached my blog because I recently wrote about the faux charity that is American Alliance for Disabled Chil...
: I am complaining over a rip-off. I received a call from the Coalition Of Autistic Children. They wanted a donation of at...
William P. Barrett: A succinct comment that says it all....
Bubba: Scumbags...
William P. Barrett: I'm amazed you got anything in the mail after refusing to pledge money sight unseen. In my experience, most of these kin...
Barbara Adkins: Thank you for your article. I, too, was contacted for a donation and my response was, “send me the information and if ...
William P. Barrett: Lots of criminal cases around the country have been pushed back because of coronavirus and the closure or reduce operati...
: I just read that this case has been pushed back till late 2021 for trial. I guess the defense has a good case and wants ...
William P. Barrett: That's not too far off from some pitches I've gotten....
Kevin P Kelley: I'm afraid I cannot to kindly assist with you your solar energy needs, but perhaps you would be strongly interested in t...
William P. Barrett: OK. Thanks for reading....
Energy Advocates LLC: Thank you for writing this! We get at least one or more very nasty emails from people on the receiving end of these cal...
William P. Barrett: Haven't seen a sign quite like that elsewhere....
(Another) Tom: I'm just a guy in Seattle who stumbled on this page and I could be wrong but I don't interpret the sign as trying to sti...
William P. Barrett: Good for you for checking. Apparently, not everyone called by this telemarketer does....
Lucy H: I just got a cold call from this organization and told them that I would donate by mail, they wanted a credit card numbe...
: Appreciate your blog and agree completely!!...
: I saw that he wrote a book. He seems to be very talented. The book is sold on Amazon. Everyone I spoke with has told me ...
: I think he lives in Hawaii right?...
: Where do they live in Las Vegas?...
: I heard the same thing. They have stopped all the cases till next year. I guess Hawaii got some big problems with the ec...
: I heard that there is a huge amount of conflicting evidence that is contrary to the prosecutions allegations. They have ...
William P. Barrett: Headline didn't call the American Coalition for Autistic Children a "faux autism charity" for nothing....
Amy: I got a phone call from a lady claimed from American Coalition for Autistic Children on Aug 11, 2020. After she talked ...
William P. Barrett: Well, I can't find it. My Google search of the defendant's name since the day of the indictment generates fewer than 30 ...
: Do the research. It’s out there....
William P. Barrett: I'm really only writing about the Las Vegas angle. But I would be happy to review the article you said you read by a law...
: Why didn’t you write about all wages earned by all 19 staff employees? That attorney and many attorneys in Hawaii know...
William P. Barrett: I wrote about the allegations of personal gain by family members in the indictment. It is not true that I asserted this ...
: In your last post you explain that you did not comment on certain facts because you lack the knowledge of the informatio...