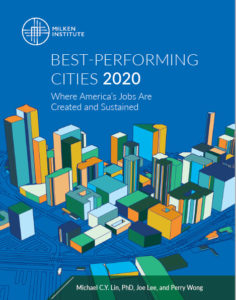 A national study released today says the Las Vegas area economy remains one of the country’s best, but not quite as good as it used to be–and not even the best in Nevada.

The report from the Milken Institute, a California economic think tank that periodically evaluates regional economies, ranks the Las Vegas metropolitan area No. 44 among the country’s 200 largest metros. But in the last report, two years ago, Las Vegas ranked a lot higher–No. 23. The 21-click drop was the biggest among the 50 highest-ranked large metros.

And in a separate evaluation of the country’s 200 next largest metropolitan areas, Carson City ranks No. 21, also better than Las Vegas when measured against peers. Last year, the state capital ranked No. 63.

The main reason for the gap between Las Vegas and Reno is more rapid job and wage growth in Reno and the fact that technology there is a bigger chunk of the local economy. In the view of the Milken Institute report’s authors, knowledge-based industries are better, perhaps because they are more sustainable.

But first, does the name Milken ring a bell? It should. In a sensational scandal, Wall Street financier Michael Milken, who famously perfected junk bonds as a tool for corporate raiders, went to prison for two years in the 1990s after pleading guilty to securities law and tax felonies, accepting a lifetime ban from the securities industry and paying more than $1 billion in fines, penalties and restitution. The whole matter apparently only set him back a bit; Forbes reckons his net worth now is $3.7 billion.

Ever since then, Milken, now 73, has been trying to burnish his reputation through philanthropic good deeds. One of them was creation of the Milken Institute, which runs conferences and churns out research reports generally aimed at advocating market-based solutions to social issues. These good deeds may have accomplished one objective; earlier this month, President Trump granted him a full pardon for his crimes.

Still, despite this checkered past–and a recent controversy over a Milken tax-break deal involving land near Reno–I have been using Milken Institute research in various ways for years, long before becoming New To Las Vegas. To me, it has been informative.

The Milken Institute study, which in print is 49 pages long, uses nine metrics based on job and wage growth, and growth of local gross domestic product in tech. Las Vegas ranked in the top 10% of the 200 metro areas in both short- and long-term job growth, and in the top 5% for long-term GDP growth in tech. But it ranked substantially in the bottom half of group for most of the metrics dealing with tech output and jobs. Not much a big surprise for an economy still based on tourism, gambling and construction.

Reno, on the other hand, ranked in the top four of the 200 on six of the nine metrics and did poorly on none. According to the report, only San Francisco, Provo, Utah; and Austin, Tex., had better economies.

The report cited Carson City as having one of the biggest ranking gains on the list, which it attributed to growth in health care, retirement communities and tourism.

In case you wonder, the worst economy among the 200 major metros was Youngstown, Pa., followed by Anchorage and Fort Smith, Ark. On the lesser metros list, No. 1 was Bend, Ore., followed by Grants Pass, Ore., and Logan, Utah. The worst was Houma, La., followed by Pine Bluff, Ark. and Bloomington, Ill.

So besides Reno, Las Vegas now finds itself behind Salinas, Calif., Greenville, S.C., Fayetteville, Ark., and Fresno, Calif. It’s a tough, competitive world out there.