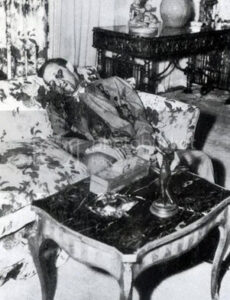 Seventy-five years ago this month, the most famous murder of consequence in Las Vegas history took place. The killing, which officially remains unsolved, profoundly changed the future gambling mecca forever. Yet the crime didn’t happen here, or even within the state.

I’m referring to the grisly assassination on June 20, 1947, of Las Vegas organized crime boss Benjamin (Bugsy) Siegel. Just 41, he was shot multiple times at point-blank range while reading a newspaper by an unknown sniper wielding a .30 caliber military M1 carbine. Where?  The living room of the home of Siegel’s girlfriend–280 miles away in Beverly Hills, Calif. His eye was found 15 feet from his once-handsome but now blasted-away face, an image immortalized in famous newspaper pictures.

Siegel was a truly despicable character with, despite his relative youth, a decades-long history of murder, extortion and racketeering on both coasts and points in between. Yet his eternal identification with Las Vegas comes notwithstanding his remarkably short residential stint here–barely one year. Public understanding of Siegel is far more myth than fact, thanks to over-hyping authors, short memories and a popular movie portrayal fudging the facts and glorifying his image.

While Siegel with mob money had opened the Flamingo, Las Vegas’s first lavish casino resort on what would become the Las Vegas Strip, it wasn’t his idea at all. Indeed, it is simply false to say that Siegel during his life was the father of the modern Las Vegas gambling-hotel-entertainment scene.

However, it would not be false to say that his death was.

Siegel was born February 28, 1906, in the tough Williamsburg section of Brooklyn, N.Y., one of five children in a poor family of immigrants from Eastern Europe. He grew up fast–too fast, really–and by most accounts dropped out of public schools to enter a life of crime, eventually gravitating to the Lower East Side of nearby Manhattan. Petty theft begat begat protection rackets begat bootlegging, armed robbery, rape and murder.

In his teens he became friends with Meyer Lanksy, four years older and equally evil, but with a genius for math, finance and organization that made him one of the leading figures in America organized crime. With Siegel’s brawn and Lansky’s brains, they organized the terrorizing Bugs and Meyer Mob. Siegel’s nickname–rarely spoken to his face–came from the perception among his peers he was crazy as a bedbug when he lost his temper. Lansky and Siegel were among the attendees at the now-legendary meeting of mob bosses in Atlantic City in 1929 that helped establish the national structure of organized crime.

Bugsy proved to be a skilled hitman–a mainstay of Murder Inc.–for Lansky and others, with any number of kills to his credit, but no convictions. However, with growing heat from authorities, Lansky and Siegel decided it would be a good idea for Siegel to relocate in the later 1930s to Los Angeles. Organized crime needed a boost there.

Pretty soon, Siegel was involved in a plethora of West Coast gangster activities, including labor racketeering, illegal gambling, drug-running from Mexico, facilitation of bookmaking by controlling the wire service providing odds for bookies–and yes, more murders. Nevertheless, Siegel–a good-looking, charismatic figure who dressed well–counted studio executives, movie stars and politicians among his associates. His long-standing marriage to a childhood sweetheart who bore him two daughters before their 1946 divorce did not restrain his active social life. His last girlfriend was Virginia Hill, a thrice-married ex-hooker who had become a courier for several Mob families, who lived well beyond her visible means–and who above all was well-informed.

Siegel also dabbled in Nevada and Las Vegas, still a rural desert whistle stop with legalized gambling but few large facilities. He had invested in several casinos in the gambling district that had grown up around the train station in downtown Las Vegas, but Las Vegas city officials, aware of his background, gave him a hard time.

His big break came in late 1945. William R. Wilkerson, the colorful founder and publisher of the Hollywood Reporter, ran out of money for his project to build a first-class casino resort on Las Vegas Boulevard at Monson Road (now E. Flamingo Road) four miles south of the existing gambling district and, more importantly, outside Las Vegas city limits. A bird lover, he planned to call it the Flamingo. (It is a urban myth that Siegel came up with the name inspired by Virginia Hill’s legs.) Wilkerson and Siegel knew each other from Los Angeles. Pretty soon Siegel, with secret financing from Lansky and other mobsters, obtained control of the unfinished site by making Wilkerson an offer he couldn’t refuse. Siegel hired noted developer Del Webb to finish the project and himself moved to Las Vegas in early 1946.

Siegel used bribery and criminal connections to get building materials that were scarce in the aftermath of World War II. That wasn’t cheap. The project’s costs were something like $4 million over budget ($60 million in today’s dollars). This greatly displeased Siegel’s mob overlords. With 105 rooms (plus living quarters for Siegel featuring private get-away routes), the lavish but still under construction facility opened on December 26, 1946, with Jimmy Durante and Rose Marie as headliners but a scant out-of-town audience due to a rare winter rainstorm. Even worse, gamblers hit lucky streaks, meaning bigger losses for the Flamingo. The resort closed a few weeks later but reopened in March 1947 with a new name: the “Fabulous Flamingo.” The second opening went a lot better.

But by most accounts, unknown to Siegel, mob bosses meeting in Havana already had decided that Siegel should be iced. By those same accounts, Lansky, who was at the reopening, reluctantly agreed to the offing of his childhood friend.

Just three months later, Siegel was executed in Beverly Hills by someone firing through a window of a pink Moorish-style mansion. Siegel was staying at the home of the in-the-know Virginia Hill, who just happened to have left a week earlier for a trip to Europe. “Disregarding the first grade rulebook for gangsters,” read an Associated Press dispatch in the next day’s Las Vegas Evening Review-Journal, “Siegel was sitting just four feet from the window in a brilliantly lighted room.”

(An obvious subject for mob retribution, Hill survived for nearly two decades until 1966, when she died near Salzburg, Austria. Her death–dubiously to some, given the mob’s continuing sway over Las Vegas–was ruled a suicide.)

Displeasure of mob bosses over Flamingo cost overruns–and maybe skimming by Siegel and/or Hill–is the generally accepted motive for Siegel’s murder. The fact that various cronies of Lansky quickly showed up at the Flamingo to take control gives some credence to this.

But there are other theories. Rivalries over Siegel’s racing-wire activities. Feuds with other Los Angeles mobsters, or gangland types from other cities. Revenge over Siegel’s sometimes-poor treatment of Hill. Equally varied is the identity of the purported hitter: known killers John (Frankie) Carbo and Frankie Carranzo, and even one of Virginia Hill’s brothers, a Marine at southern California’s Camp Pendleton upset with Siegel’s treatment of his sister and who might have had access to the military-grade instrument of death. (Another brother of Hill actually was upstairs the night Siegel was killed.)

With a population of less than 25,000, dusty Las Vegas was still a blip on the tourist map when Siegel was killed. But that quickly changed. His murder and especially the gory pictures of his body drew the public rapt attention–and interest as an alluring place to gamble and see shows. The Fabulous Flamingo became a hit, culturally, financially and, much later, historically. Siegel’s death helped break the hold of the New York mob on Las Vegas and opened up the city to organized crime families pouring in from Cleveland (Morris Barney “Moe” Dalitz), Chicago (Sam Giancana), Kansas City (Nick Civella), and other places. (By contrast, the famous, still-unsolved 1996 murder just a few blocks from the Flamingo of rapper Tupac Shakur had no significant local impact.)

More or less coexisting while competing, the Mafia outfits eager to skim lucrative profits before declaring taxes obtained massive financing in a mad rush to develop bigger and bigger casino hotel resorts–almost all outside the city limits of Las Vegas, with its higher taxes and skeptical officials. Some of the early money actually came hypocritically from the anti-gambling, anti-liquor Church of Jesus of Latter-Day Saints in Salt Lake City, hidden behind friendly bankers. Other Mob-run casinos were built with loans from the corrupt Teamsters Central States Pension Fund overseen by Jimmy Hoffa.

Eventually, under pressure from regulators, government officials and investigators, the mob sold its stakes to legitimate business and corporate interests, led by Howard Hughes, although mob influences lasted well into the 1980s. The Flamingo itself remained mobbed up until 1967 when businessman Kirk Kerkorian purchased it. The property is now part of Caesars Entertainment.

It is partly due to the aftermath of Siegel’s death that the Mob Museum opened here in 2012 a few years before I became New To Las Vegas.

The utterly false perception that Siegel somehow “made” Las Vegas is a theme of the 1991 movie “Bugsy,” starring Warren Beatty as Siegel and his future-wife Annette Bening as Virginia Hill. But elements of Siegel’s life still resonate. “The Godfather,” the acclaimed 1972 movie back in the news for its half-century anniversary, contains a Las Vegas mobster modeled after Siegel, down to being shot through the eye.

After decades of denying its mob provenance, what is now the Flamingo Las Vegas literally bathes in it. Siegel’s original building is long gone, replaced by grander structures. But there is Bugsy’s Bar as well as Bugsy and Meyer’s Steakhouse, cheekily described on the Flamingo’s official website as a way to “be transported back to Old Vegas.” There is even an outdoor monument to Siegel on the grounds stating that he “was killed in a hail of gunfire by unknown assailants.”

According to a United Press dispatch, Siegel’s brief service in 1947 at a Los Angeles mortuary was attended only by his ex-wife, two children, two siblings and an uninjured mob associate who was in the room during the shooting six days earlier. The silver-plated casket holding what was left of Siegel’s body eventually was interred in a mausoleum at Hollywood Forever Cemetery in Los Angeles. “In loving memory from the family,” it says a little cryptically on his couch crypt. Still, it remains oddly fitting that the Las Vegas mob boss rubbed out so far away from Las Vegas also was interred for all of posterity so far away from Las Vegas.