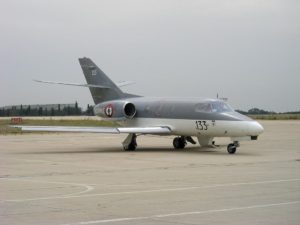 When Orville and Wilbur Wright made their famous first powered flights at Kitty Hawk, N.C. on December 17, 1903, they didn’t have pilot licenses. No such things existed. But since 1927, every civilian pilot in the U.S. has had one. For nearly a century it’s been a federal criminal act to operate aircraft without proper permissions.

Which brings me to one Arnold Gerald Leto III. He was just sentenced in Los Angeles federal court to hard time after pleading guilty to piloting aircraft without the correct license. Since I am New To Las Vegas, you probably know where I’m going with this. One of those flights, in a Falcon 10 turbojet like the one pictured nearby, was to the bright lights of Sin City.

So Leto gets a nomination to my list, It Didn’t Stay Here. It’s devoted to examples of people getting in trouble elsewhere for something that happened in Las Vegas. It’s a counter-argument, of course, to that catchy pleasure-seeking marketing slogan of the Las Vegas Convention and Visitors Authority, “What Happens Here, Stays Here.”

Leto, 37, who lives in Irvine, Calif., has been a pilot holding varying licenses for some years. According to the federal indictment that Leto admitted was true, on April 8, 2016, he illegally piloted the Falcon 10 on a flight from Van Nuys Airport in Los Angeles to Las Vegas. A year earlier, he illegally piloted a Cessna Citation turbojet from Santa Monica Airport near Los Angeles to Phoenix. Other court filings suggest Leto made additional illegal flights to Las Vegas and elsewhere. Although the court papers don’t explicitly say this, a trade pub report said he carried paying passengers on the flights.

An affidavit filed in federal court by Louis Burrell, a special agent with the U.S. Department of Transportation, suggests the feds had had their eye on Leto for some time. In January 2016, the FAA had issued an emergency order revoking Leto’s pilot’s license after receiving reports he had been piloting a two-pilot Falcon 10 without the proper certification and without a co-pilot. Leto supposedly blew off the notice and never responded.

On April 8, 2016, a line service technician at the Van Nuys Airport reported that Leto loaded seven or eight passengers onto a Falcon 10 and, with only himself in the cockpit, “as usual” took off for Las Vegas.

“Federal regulations governing the operation of aircraft and other common carriers are designed to protect the traveling public,” then-U.S Attorney Eileen M. Decker said in a statement when Leto was initially charged soon after that Las Vegas trip. “The investigation into Mr. Leto shows that he flagrantly violated these rules–and continued to do so after the FAA took action to take him out of the air. A swift and thorough investigation by the Department of Transportation has now improved the safety of all air travelers.”

In a March 24, 2017, court filing, Leto’s lawyer, Donald R. Hammond, acknowledged his client’s culpability but argued for mercy based on current family circumstances, a trying upbringing, good deeds, business prospects outside of aviation and subsequent cooperation with the feds. Hammond outlined a somewhat bizarre tale in which Leto, trying to curry favor, provided information to investigators about “several other people who be believes to be engaged in criminal enterprises.” I can do no better than quote that portion of the filing, which to my mind has a Las Vegas-ish flavor to it:

In an effort to further assist the government, in August 2016, he [Leto]
contacted some people to inquire about moving illegal drugs, and that situation got out of hand when these drug traffickers came to Mr. Leto’s home with guns and demanded that he transport 500 pounds of marijuana. Mr. Leto was arrested in San Bernardino County, but no charges have been filed against him to date.

Leto faced up to six years. But U.S. District Judge Dale S. Fischer last month sentenced him to just 10 months in prison followed by a year of supervised release and payment of a $5,500 fine.

The Wright brothers prospered without a pilot license. As for Leto, he effectively has traded his for U.S. Bureau of Prisons inmate number 73429112 and a stint likely to be served in a California prison far from the Las Vegas runways he once graced.