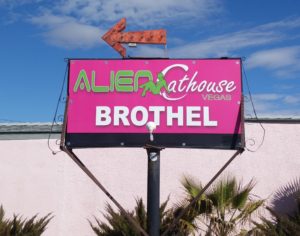 By itself, the Las Vegas Strip is almost other-worldly, brimming as it does with neon lights, volcanoes, pyramids, towers and other strange shapes all jumbled together. So maybe it’s not all that surprising that Las Vegas and its environs revel in–or at least profit from–that enduring category of human curiosity called unidentified flying objects.

Strip souvenir stores have lots of UFO knickknacks–T-shirts sporting triangular heads of supposed extraterrestrial aliens and coffee mugs referencing Area 51. That’s the top-secret U.S. military base 90 miles north of town said to be involved, if you believe the gossip, in UFO body-storage (but far more likely, development of military aircraft like the U-2 spy plane and testing of captured foreign war planes). The minor league baseball team, the Triple A affiliate of the New York Mets, is called the Las Vegas 51s. Cashman Field, the team’s home stadium, is festooned with images of ETs.

At about $200 a pop, tour operators run all-day trips from Las Vegas to the very edge of Area 51, where the tiny town of Rachel, Nev. (population 54) sits on State Route 375. The utterly desolate road is officially named (I kid you not) the Extraterrestrial Highway, due to both the proximity of Area 51 and the number of UFO sightings reported thereabouts over the years. In Rachel, an “alien burger” is on the menu at the Little A’Le’Inn.

For a different kind of trip, one can visit the Alien Cathouse Vegas Brothel in Amargosa Valley, Nev., 60 miles northwest of Las Vegas, along U.S. 95 on the south side of the vast Nevada Test and Training Range off which Area 51 sits on the northeast side. That’s a house of legal prostitution and, I suppose, a destination if a UFO lands nearby and the pilot says, “Take me to your breeder.”

This is not the first time I have resided in a region with a UFO “tradition,” nor even the second. Before becoming New To Las Vegas. I lived in New Mexico and Washington State, each with its own claims to UFO-ology, and had occasion to examine the underlying basis.

New Mexico, of course, is home of the Roswell Incident, the supposed crash of an alien spacecraft and recovery of bodies in the summer of 1947 about 100 miles south of Albuquerque. That same summer, it was near Mount Rainier, 80 miles south of Seattle, that pilot Kenneth Arnold reported seeing near him in the air what he described nine objects flying “like a saucer would.” It was the first use of the concept of a flying saucer to describe UFOs.

About that same time, several men reported falling UFO debris on Maury Island, in the Puget Sound near Seattle, along with the appearance of a mysterious “man in black,” supposedly from the government, to cover up what became known as the Maury Island Mystery, also called the Maury Island Incident.

Now, I am perfectly willing to believe there could be life on other planets, and that it is even possible that we have been visited. But my belief is no substitute for hard evidence. And in the two cases I have looked into, there isn’t any, although you might not know that from perusing the Internet.

Did you know that a half-dozen sites over a 200-mile area have been identified as the location of the Roswell Incident, often called the world’s most investigated UFO situation? That what I learned when I took a close look at the evidence two decades ago for Crosswinds, at the time New Mexico’s largest alternative newspaper. You can read my long account, complete with a map, by clicking here.

Why so many locations? Because nothing extraterrestrial ever happened, and essentially everyone was making it up, sometimes forging documents, testimony and recollections. No bodies were found, let alone carted away to some place like Area 51 (a specific plot point in the entertaining but obviously fictional 1996 movie, Independence Day, starring Will Smith). What happened is that a two-mile-high balloon monitoring Russian nuclear testing–essentially, a very tall antenna–malfunctioned and fell to earth. When civilians got to the debris before the military, a cover story was put out saying it was a weather balloon. Over time, the story, shall we say, swelled a bit as folks tried to make a buck.

Five years after my article, Karl T. Pflock, a former U.S. deputy assistant defense secretary receptive to the theory of alien UFOs, published ROSWELL: Inconvenient Facts and the Will to Believe. The book took apart Roswell Incident “evidence” manufactured fact by manufactured fact. You can read my review of his book by clicking here.

I have no personal opinion about the reported flying saucers of Kenneth Arnold, a man acting in good faith. I haven’t looked into his claims. The Air Force later concluded that what he saw were mirages or cluster of disc-shaped clouds.

But the Maury Island Mystery is a total hoax. Read my 2013 account by clicking here. Two men from Tacoma who were in a boat, Harold Dahl and Fred Crisman, said they had debris that fell to earth when one of six doughnut-shaped aircraft exploded over Maury Island. Dahl claimed that a man in a dark suit subsequently threatened him and damaged some of his photographic evidence. Dahl and Crisman later admitted to FBI investigators their story was made up, and the debris they had was rock scraped from a Maury Island beach.

One interesting parallel to me between New Mexico and Nevada when it comes to UFO-mania is the presence of US. government nuclear bomb experimentation in both states. That has fueled a notion–at least on the Internet–that lingering radioactivity might have been bug lights to intergalactic travelers, adding a bit of plausibility.

Two years before the Roswell Incident and 50 miles away (from some of the many alleged UFO crash sites), the U.S. military detonated the world’s first nuclear bomb in 1945 at the Trinity Site. Copies were soon dropped on Hiroshima and Nagasaki, ending World War II.

During the 1950s, some 100 above-ground nuclear bombs were set off at the Nevada Test and Training Range. Most of them were exploded less than 100 miles from Las Vegas and their mushroom clouds could be seen from the Strip. Hard as it may seem to understand now, the explosions were touted at the time as tourist attractions. In the past half-century the U.S. government has paid out $2 billion to settle 30,000 cancer claims related to the testing.

The military continues to accord Area 51 the highest level of secrecy. Two years ago, the feds seized the only 400 acres of privately held land on ground high enough to peer into the spook factory and see some of what is going on. The family that had owned the acreage since the 1800s is in court claiming it was stiffed on just compensation.

When it comes to UFOs, the Las Vegas area definitely is part of the effort to turn little green men into big green dollars.