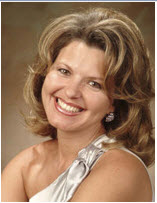 Angelina Lazar in 2006 during her Las Vegas days

More than a decade ago, Angelina Lazar spent time in Las Vegas running a business called Charismatic Exchange. It purported to be a dealer in foreign currency. She told would-be investors to expect a risk-free return of 20%–every month.

During 2005 and 2006, Lazar tried to cut a wide swath around Sin City. The Internet has glamorous photos of her from that time, like the one adorning this post. In one press release she called herself the “esteemed community mayor of Las Vegas.” Lazar curried favor with local and national Republican politicians.

She’s long gone from her apartment on W. Sahara Ave. and her offices on W. Lake Mead Boulevard and Howard Hughes Parkway. Nor is she likely to return in a physical sense. Last month, Lazar, 54, pleaded guilty in federal court in Alexandria Va., to running a Ponzi scheme out of Las Vegas. She was ordered to pay $20,000 in restitution and immediately deported to Canada, where she is a citizen.

Lazar thus becomes the latest candidate for my list, It Didn’t Stay Here. The roster consists of individuals who get into trouble someplace else for something that happened in Las Vegas. It is a play on “What Happens Here, Stays Here,” the famous promotional slogan of the Las Vegas Convention and Visitors Authority. The full list can be found elsewhere on this page.

If you’re wondering why the case against Lazar was brought in Virginia rather than Nevada, one answer might be that’s where America Online had the email servers through which Lazar’s fraudulent communications flowed. Technically, she pleaded guilty to a single count of wire fraud, a felony.

And if you’re wondering why a criminal case turning on events happening more than a decade ago just got resolved now, the answer is that the four-count criminal indictment against her was brought in 2009 but kept secret because Lazar in effect was on the lam–out of the country. “The FBI may attempt to lure the defendant back into the United States in order to arrest her,” the feds said in a motion to seal the indictment.

But as it turned out, Lazar apparently showed up on her own accord, perhaps unaware of the indictment. She was arrested in February–nearly eight years after the indictment was secretly filed–after driving into the country through the Detroit-Windsor Tunnel. A warrant for her arrest popped up when the border agent checked her name.

I am indebted to veteran Las Vegas journalist John L. Smith, writing for The Nevada Independent, for learning about Lazar, whose local activities took place long before I became New To Las Vegas. Smith’s long takeout is here. But the facts and conclusions in this post are drawn from my own research. I invite comments from anyone mentioned or interested.

Here’s how a press release last month from the U.S. Attorney’s Office in Alexandria put it:

[Lazar] was the Chairman and CEO of Charismatic Exchange, Inc., an investment firm in Las Vegas. From May 2005 through February 2007, Lazar solicited individuals to invest money in foreign exchange currency funds she managed. As part of the scheme, Lazar guaranteed investors a monthly return of 20 percent or more. However, Lazar falsely represented her experience, her success rate, how funds would be invested, and how funds were ultimately spent. For example, Lazar told investors her company used special software program to facilitate and enhance her ability to successfully trade foreign currencies. In truth, Lazar did not possess the software nor did her company ever purchase it. Likewise, Lazar showed investors trading reports that purportedly validated executed foreign currency trades resulting in significant profits. In fact, the trading reports represented only simulated currency trades and no money was actually invested. As a result of her fraudulent conduct, victim investors suffered at least $20,000 in losses.

The one count she pleaded guilty to–the other three were dismissed as part of a plea deal–said she used investor funds “for personal or miscellaneous office expenses or to pay off earlier investors.” That’s the classic definition of a Ponzi fraud: taking money from new investors to pay returns to earlier investors rather than from the profits of a viable business.

Now, as a veteran business journalist, I’d say touting a “guaranteed” investment return of 20% per month should be a screaming red flag to any would-be investor. If it really was legitimate,  why wouldn’t the promoters simply borrow money and keep the fat margins for themselves? So while greed is a powerful human force, it’s unclear to me how much money Lazar actually swindled from folks. The fact that the feds were willing to settle for her deportation after time served–the three months from her arrest at the Detroit-Windsor Tunnel until her return to Canada–suggests this was not exactly of Bernard Madoff magnitude. The maximum hard time for a wire fraud conviction is 20 years.

But Lazar did have a track record, especially around the Internet, and much of it was not flattering. There remains to this very day a Facebook group page entitled “The truth about Angelina Lazar,” with an opening post that calls her “the well known scam artist.” A 2011 post on a fraud-warning site says of her, “Don’t do business with that lady” (along with Lazar’s vehement rebuttal).

A 2006 order by the Illinois Secretary of State temporarily banning Lazar and Charismatic Exchange from operating in that state quoted one of her offering circulars to would-be investors. It gave the flavor of her spiel:

Charismatic Exchange, Inc. is an intimate and exclusive Trading Company in the Foreign Exchange market which deals primarily with high net worth investors and entrepreneurs … In order for us to regularly trade more foreign currencies in the FOREX market we have formed a lucrative and intimate business opportunity by accepting loans from our partnering Investors where we offer them a lucrative 20% R.O.I, per month. Such a return can only be offered in the high risk, high yield arena of foreign exchange where our trading skills and discipline are par excellence.

Charismatic Exchange Inc. takes the risk on all trades and is obliged to return our clients as promised a 20% return per month until either party wishes to terminate the Agreement. Charismatic Exchange, Inc. covers the cost of all trades, including interest when sitting in overnight trades (when swing or position trading) and lakes all risks while trading while affording our Lenders a passive 20% monthly return no matter what the results we experience that month.

I look forward to personally working with you in our mutually lucrative business endeavor. Please feel free to call or email me as the need arises. I take great pride in letting my clients know that they are most liquid with Charismatic Exchange, Inc. while being afforded the most lucrative returns. This gives my clients a great peace of mind to know that they can gain access to their funds without any penalty while lending Charismatic Exchange, Inc the image we have earned of perfecting our work and being fair, gracious and generous.

A government filing in the criminal case successfully opposing her release before conviction painted Lazar as something of a woman of the world (meaning she was a threat to flee). It said that since her days in Las Vegas she had lived in Ghana, Dubai, England and Serbia. At the time of her Detroit-Windsor Tunnel arrest she had a residency card for Dubai as well as Ghanaian currency (and, suspiciously, two U.S. Social Security cards with different numbers, one for her current name, the other for a previous name, Angela Dragicevic). Her own Facebook page suggests she grew up in Windsor.

Lazar is certainly capable of responding. Before pleading guilty to running a Ponzi herself, she actually depicted herself as someone who fought Ponzi operations in the murky foreign exchange area. I suppose it takes one to know one.

Charismatic Exchange Inc.’s corporate charter in Nevada has been permanently revoked. But Lazar likely is in Windsor, within clear sight of U.S. territory, and the Internet knows few national boundaries. Vegas, I’d say watch out for her no matter where she is.