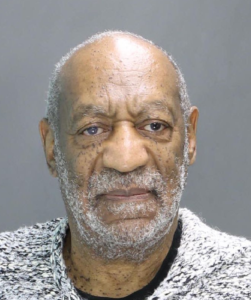 There already were some famous nominees for my list It Didn’t Stay Here. The roster features folks in trouble elsewhere for something that happened in Las Vegas, disproving the cheeky local marketing slogan, “What Happens Here, Stays Here.” President Donald J. Trump is one, thanks to a videotaped 2013 party that involved a whole lot of Russians. Another is Emmanuel Macron, who, before he became president of France, presided over an out-of-budget-control marketing event at the 2016 Consumer Electronics Show. The entire list is displayed nearby.

To these luminaries I now add another–Bill Cosby. Last week, the 80-year-old comedian was convicted in a Norristown, Pa., courtroom of all three felony aggravated indecent assault counts against him. Five women, plus Andrea Constand, whose situation led to that prosecution, described in court a long-standing pattern of using drugs to overcome their lack of consent. More to my point, two of those five recounted attacks in Las Vegas at what was then the Las Vegas Hilton, previously the International Hotel and now the Westgate Las Vegas, where Cosby frequently performed.

By my count from news reports, at least another seven of the 60 or so women who have come forward publicly in the past 15 years to accuse Cosby of crimes said their incidents took place in Las Vegas. That makes Vegas with that anything-goes-but-keep-it-quiet imprimatur the crime venue of 15% of all known allegations against Cosby.

Cosby faces a prison sentence in Pennsylvania of up to 30 years. That certainly meets my New To Las Vegas definition of being in trouble elsewhere.

None of the claims emanating from Las Vegas, which are in the time period 1970 to 1989, has resulted in criminal or civil cases in Nevada against Cosby, who generally has denied all allegations everywhere. That is partly because Nevada’s statute of limitation for criminal prosecution of rape was only four years until 2015, when it was extended to 20 years at the urging of Lisa Lotte-Lublin, who testified at the Cosby trial. I’m also thinking that overall societal support for the national #MeToo movement might be a little thinner here.

But besides the testimony in the Constand case in Pennsylvania, two woman citing Las Vegas incidents are plaintiffs in a federal defamation case against Cosby in Massachusetts, where he has a home, calling his more recent denial of wrongdoing slurs on their character. (For what it’s worth, the other three women besides Constand who testified at the Cosby trial also spoke about assaults in Nevada, two in Reno and one at Lake Tahoe.)

Of those who encountered Cosby in Las Vegas, Lotte-Lublin, now a school teacher in Las Vegas, is by far the most visible, and vocal. She testified at Cosby’s trial she was invited to his room–the Elvis Presley Suite–at the Las Vegas Hilton in 1989 as a 23-year-old model and aspiring actress to receive “mentoring.” At some point, she said, after consuming two drinks he poured, she lost consciousness. She said the next thing she remembered was waking up two days later at her Las Vegas house, with her car in the driveway, having no idea how she got home.

The other woman who testified at the Cosby trial about Las Vegas was Chelan Lasha, a dietician who lives in California. Sobbing for much of her courtroom appearance, she said she was a 17-year-old aspiring model and actress when Cosby invited her to his Las Vegas Hilton room in 1986 to discuss a possible role in his TV show. After complaining about a cold, she said Cosby gave her alcohol and a “blue pill” that she said made her woozy. At that point, she said Cosby pushed her toward the bed and sexually assaulted her. “You remember, don’t you, Mr. Cosby?” she said in court to the defendant, who, according to press accounts, “smiled slightly.” She also testified that Cosby subsequently threatened her in a phone calling, saying, “People that talk too much can be quieted.”

In Massachusetts, Therese Serignese alleges she was defamed when Cosby denied her account that, when she was 19 years old in 1976, Cosby spotted her in a Las Vegas hotel gift shop–yes, at the Las Vegas Hilton–invited her to his show and afterwards drugged and raped her backstage. Another plaintiff in that case, Angela Leslie, asserts defamation when Cosby disputed her story that she was an aspiring 26-year-old actress in 1992 hoping to discuss acting opportunities when he assaulted her, also in the Elvis Presley Suite at the Hilton. According to filings, both women have received payments from Cosby.

Here are the other women who have come forward citing Las Vegas venues:

—Linda Kirkpatrick, who said that in 1981 at age 25, after playing tennis against Cosby, was invited backstage at Cosby’s show at the Hilton, where the comedian handed her a drink that made her pass out, during which he initiated sexual activity.

—Pamela Abeyta, who says that as an aspiring Playboy model at age 25 in 1979, she was flown to Las Vegas to meet Cosby at the Hilton, where she was drugged, passed out, and awakened to find herself in Cosby’s bed.

—Autumn Burns, who says that as a model and casino worker at age 24 in “about 1970,” she met Cosby at the International Hotel (the previous name of the Hilton), later ended up in his room, consumed a drink he gave her, got woozy and was forced to have sex with him.

—Rebecca Lynn Neal, who says she met Cosby in “about 1986” at a Las Vegas health club where she was working, was invited to his show and afterwards was drugged and raped by him.

—Joyce Emmons, a comedy club owner and former friend of Cosby who says that in 1979 or 1980 Cosby drugged her at his suite at Caesars Palace and she woke up naked in a bed with one of Cosby’s friends who suggested they had just had sex while she was unconscious.

The Las Vegas Convention and Visitors Authority has the rights to “What Happens Here, Stays Here.” Maybe it’s time to let the slogan officially go somewhere else.