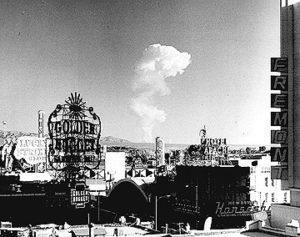 Much of the Las Vegas and Nevada political establishment is up in arms over legislation moving through Congress that would jump-start plans to store power plant nuclear waste from 39 states at Yucca Mountain, 90 miles northwest of Las Vegas. By an overwhelming vote a bill to resume the licensing process after an eight-year delay just passed the House of Representatives. The Senate Republican leadership won’t consider it until after the November elections to give Nevada Republican Sen. Dean Heller, in a tough re-election campaign, some breathing room. Even though he opposes Yucca Mountain, it wouldn’t look too good if the legislation passed on his party’s watch.

The Yucca Mountain proposal has been around since 1987; the feds already have spent something like $9 billion in research and test tunnel costs. When he was the Senate majority leader, long-time Sen. Harry Reid (D-Nev.) saw to it that plans went nowhere. But then the Senate turned Republican. Reid retired. Ergo, the Yucca renaissance.

As someone still New To Las Vegas, I have a theory here. To me, the potential siting of a nuclear waste dump in Nevada smacks of payback for all the years the state profited mightily from stuff illegal for the longest time in the rest of the country: casino and other forms of gambling, prostitution, quicky marriage and divorce, tolerance for organized crime, and super-secret incorporation laws.

Then there’s the state’s tax structure (no state income tax and modest property taxes), which attracts new residents from other states struggling to hold on to their tax bases. Add to that Nevada’s still-modest population of barely 3 million, its remoteness and its wide open spaces. It’s not hard to see why Nevada would be an inviting prospect (to non-Nevadans) for a nuclear storage facility that would have to last at least 10,000 years.

And although Nevada neither has nuclear power plants nor buys nuclear-generated power from elsewhere, it’s not like the state has no nuclear history. At the Nevada National Security Site, formerly called the Nevada Test Site, just 60 miles northwest of Las Vegas and not far from Yucca Mountain on an adjoining tract of land, the feds set off 928 nuclear explosions for military purposes from 1951 to 1992. Most of those were underground. But in the first decade, 100 of them were above ground–open air. The mushroom clouds were easily seen from Las Vegas (see the picture accompanying this post) and even advertised as tourist attractions.

With the prevailing winds due west, some studies have shown higher-than-normal incidents of cancers associated with radiation around St. George, Utah, 120 miles northeast of Las Vegas, and southwestern Utah. As a result some Utah Congressmen are also opposed to Yucca Mountain.

Way back in 1998, I wrote a profile for Forbes of remote Carlsbad, N.M., in the Land of Enchantment’s southeastern corner 280 miles from Albuquerque. The U.S. government had built east of town the Waste Isolation Pilot Project, a final underground resting place for contaminated byproducts of military nuclear weapons research. (WIPP received its first shipment in 1999.) What made this so unusual: Carlsbad city fathers actually invited the feds, whose previous bid to put a facility in Kansas failed due to shoddy underground mapping and adverse local public opinion, to put WIPP in their backyard.

Concerning Carlsbad and WIPP, the state of New Mexico largely stayed out of the way, one reason WIPP became operational. Not so here in Nevada, where federal, statewide and Las Vegas officials have pledge undying opposition.

But like Carlsbad, $ome folk$ living around Yucca Mountain $ort of like the idea. County commissioners in Nye County, where Yucca Mountain is located, have cited the prospect of well-paying federal jobs in calling for a siting decision based on science and not politics. Indeed, counting Nye, nine of Nevada’s 16 counties have called for the licensing process to resume. Not in that group: Clark County, home of Las Vegas and 70% of the state’s population.

No less than The New York Times long ago quoted someone calling the 1987 federal law designating Yucca Mountain as the one storage facility for non-military nuclear wastes  the “Screw Nevada Bill.” It’s not hard to see why.