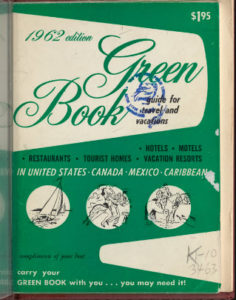 The name of the Best Picture Oscar-winning movie “Green Book” comes from a published guide to places where black travelers and tourists could stay without being hassled on account of their race during much of the 20th century after the advent of automobiles. In the movie, the Green Book was used to help guide real-life characters–black pianist Don Shirley (played by Mahershala Ali, who won his own Best Supporting Actor Oscar) and his white driver/bodyguard, Tony Vallelonga (portrayed by Viggo Mortensen)–across the deep South during a 1962 concert tour.

The South, of course, was infamous for its racial intolerance. So it’s easy for folks in other parts of the country to look back and smirk. However, the Green Book–its full name was the Negro Motorist Green Book–quickly came to cover the entire United States.

And it proved to be an interesting measure of racial comity. Based on the paucity of listings in most places, few regions came out looking good.

But few fared as poorly as Las Vegas.

The Green Book was published from 1936 until 1967, after passage of the federal Civil Rights Act of 1964 outlawed discrimination in places of public accommodation and mooted the guide’s raison d’être. During that entire three-decade period, Las Vegas dramatically rose in destination popularity as a gambling and entertainment mecca. Yet only a total of five places to stay–and no places to eat or get a haircut–ever appeared in any edition of the Green Book.

In 1962, the year depicted in the movie, just four Las Vegas lodging establishments were listed in the Green Book. All four were located in the black section of town now known as the Historic Westside. None was on the Strip, which supposedly had started desegregating its premises in 1960. Indeed, the final edition of the Green Book in 1967 listed the same four establishments–and nothing on the Strip.

Still New To Las Vegas, I have been aware of the Green Book for some time. In 2012, I cited it at length to describe the deplorable historic segregation of Seattle, where I lived at the time. I now have reviewed almost all of the annual editions, which can be found online at the New York Public Library. The publication is named after its founder, New York postal worker Victor H. Green, who got much of his information from a network of fellow post office employees and, eventually, travelers themselves.

In Las Vegas (as well as Seattle), things are a lot better now, but the Las Vegas area’s bad racial history is well known. In 1954, Ebony magazine called Las Vegas the “Mississippi of the West” for its racial practices, substandard housing for blacks and Strip exclusion practices. The University of Nevada, Las Vegas football team–the Rebels–once had Confederate emblems on the helmets. Dixie State University–can any name more invoke the racist South?–is located just up Interstate 15 in St. George, Utah, the nearest population mass of any size. 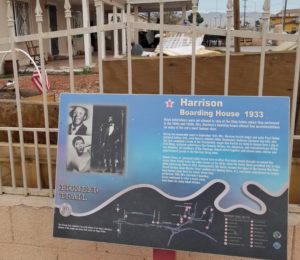 Entertainers of color in Las Vegas on the Strip often had to stay elsewhere. Indeed, one place occasionally listed in the Green Book, the Harrison Guest House at 1001 N. F St., so often housed the entertainer Sammy Davis Jr. that he was wrongly thought to have owned the property. A historic marker sporting Davis’s picture (see photo nearby) adorns the bungalow building, which is now owned by the Las Vegas Ward 5 Chamber of Commerce and used as a cultural center.

History has not been kind to the other Las Vegas locations in the Green Book, judging from a recent spin I took around the Historic Westside. The Hotel Jackson at 405 W. Jackson Ave. is gone, as are the Carver House at 400 W. Jackson Ave., the Shaw Apt. Tourist Home at 619 Van Buren St., and the West Motel at 950 W. Bonanza Rd. Ironically, the opening up of the Strip to visitors of all kinds probably hastened the demise of these places.

Five establishments. That’s all that Las Vegas had to offer for the longest time to minority visitors.

In case you wonder about the rest of vast Nevada, the situation wasn’t much better. The 1962 Green Book listed five other places. Two were in tiny, nearby Boulder City: the Boulder Dam Hotel and the Lake Meade Lodge. Reno, then roughly the same size as Las Vegas, also had two, the Hawthorne Tourist Hotel and the New China Club. The fifth was the Louis Motel in tiny Elko, astride the Transcontinental Railroad in northern Nevada.

Had Don Shirley with his muscle taken his act to Las Vegas in 1962, he would have encountered a rough scene. By comparison, maybe the deep South wasn’t so bad.

William P. Barrett: Michael, if he goes for the million-dollar ploy, make sure you ask for the address to which the check should be sent--an...
Michael: I got a call from Jason today and I told him that if he ever calls my phone again I would go after him and if I catch hi...
William P. Barrett: Keep us posted....
: I finally FINALLY decided to actually get to the bottom of "Jason". I answered, got to a live person, gave them the answ...
William P. Barrett: Jeff, the fact that other causes use the exact same script doesn't automatically mean they're all from the same organiza...
Jeff: This is a scam organization. They run numerous other pitches with this exact same script. Not only do they run this pitc...
William P. Barrett: Liz, the organization probably is afraid you or someone would tape the postage-paid envelope to a brick and mail it....
Liz: Yes, they are sleazy. I will print out your post and send it. Of course, they do not supply postage free return envelo...
William P. Barrett: Paul, judging from news accounts, Congressman Gaetz might have some other things on his mind. You might consider contact...
Paul Martin: I am in Florida and just got what seems like my hundredth call from Jason each time from a different number since I bloc...
William P. Barrett: Liz, these PACs that I call faux charities are pretty sleazy....
William P. Barrett: Liz, consider printing out and enclosing a copy of my post....
Liz: Liz again, I am also returning the pledge card with a note as to why I am not honoring my pledge: "After reviewing you...
Liz: I recently got a call (3/8/21) from the American Coalition for Autistic Children PAC asking for a contribution. My stan...
William P. Barrett: Rieve, yes, the Mastroianni operation is really something....
Rieve: Just stopped my 71 year old father in law from sending in a donation. I write out his bills for him and I'd never heard ...
William P. Barrett: Mac, I haven't heard of any criminal prosecutions, much less jailings....
Mac: Jason is still doing his scams in Florida I just had call from him . I thought he was in jail along with his friend P...
William P. Barrett: Why?...
: GO BACK TO SEATTLE!...
William P. Barrett: Kay, that's what I sometimes tell the many callers peddling extended car warranties; I just signed up with another and c...
Kay: I get calls at least twice a week from Energy Advocates. I’m at the point where I play along and then tell them I jus...
William P. Barrett: Sylvia, I don't know where you live, but you might consider complaining to whoever regulates charitable solicitations in...
Sylvia Ahern: Thank you! My husband, who has mild dementia AND an autistic grandchild, got snookered. Despite that he actually paid on...
John McCauley: I keep getting these ridiculous robocalls. I have asked at least a dozen times to be put on a do not call list. If I ke...
Stephanie Harrington: I just received a call from Jason with Energy Advocates out of Paxton FL. I could tell it was a computer generated so I...
William P. Barrett: Bemore, wonder if you could complain to the agency that gave you the phone....
Bemore: I have been homeless for a year and get calls from that idiot daily, I don't have a job and barely enough in one to keep...
Jen: I just found 2 credit card charges to this outfit on my elderly mother's visa bill. I did a little investigating and it ...
William P. Barrett: Ben, unfortunately, so far regulators have shown little interest in this issue....