Over the weekend, Pete Buttigieg, the only openly gay presidential candidate for 2020, told a TV interviewer that it was “statistically almost certain” that the U.S. already has had a gay president.

I can do a lot better than that. Not only has the U.S. had a gay president, it also had a gay vice president, although not at the same time. But amazingly, the two were an item for many years.

Don’t worry, you didn’t miss this sleeping through your high school class on American history. This kind of stuff just wasn’t in the curriculum in the old days.

Before becoming New To Las Vegas, I was New To Seattle. As visitors to this space may know, I like to explore history. Just as I wrote here about the colorful origins of Clark County, I wrote about the colorful origins of King County, in which Seattle sits. And that’s when I documented the interesting long-ago background of some folks in high office, from which much of the material in this post is drawn. 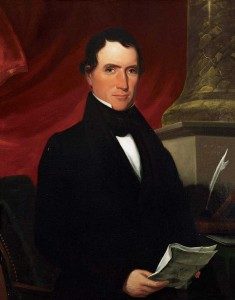 King County was originally named in 1852 for William Rufus DeVane King, a veteran Alabama U.S. senator and major slave-owner (he founded the later-to-be-infamous city of Selma). King had just been elected Vice President on the ticket of President Franklin Pierce, but died weeks after taking office the following year. (In 1986 the shocked liberals around Seattle changed the historical basis for the county’s name to Dr. Martin Luther King Jr.)

Bill King was first elected to the Senate in 1819. He was a popular figure with his colleagues, although, as Time Magazine once wrote, he was a “foppish dresser who wore powdered wigs long after they were fashionable.”

A number of writers and historians believe it very likely that King and Buchanan were in some kind of a committed relationship. The own words of the politicians are quoted. “I am selfish enough to hope you will not be able to procure an associate who will cause you to feel no regret at our separation,” King suggestively wrote Buchanan from Paris, as quoted in Presidential Sex: From the Founding Fathers to Bill Clinton, by Wesley O. Hagood.

According to Affairs of State: The Untold History of Presidential Love, Sex and Scandal, 1790-1900, by Robert P. Watson, shortly after King’s death, Buchanan wrote one female friend, “I am now ‘solitary and alone’ having no companion in the house with me. I have gone a wooing to several gentlemen, but have not succeeded with any of them.” The implication seemed clear. Various associates described the two men using other euphemisms of the era for homosexuals, such as “Siamese twins,” slang then for a gay couple.

In 1852 the Democratic ticket of Pierce and King trounced two others to win the White House. But as it turned out, King had tuberculosis and was dying. Looking for a cure, he traveled to Cuba and was actually sworn in as vice president there in March 1853–the only national leader to take such an oath on foreign soil. He soon returned to the U.S. and, at 67, died a day later on his plantation in Selma. King was in office just 46 days and never presided over the U.S. Senate as vice president or otherwise took up his duties.

As for Buchanan, he was elected President in 1856–beating, among others, John C. Frémont, the fledgling Republican Party’s first national candidate (and in my opinion, a war criminal) and the man for whom Fremont Street in Las Vegas is named. Buchanan’s supporters fended off rumors about his personal life by noting he once was engaged to a woman (who, for some reason, killed herself). But in office Buchanan did such a lousy job that his one term ended with the start of the Civil War.

To this day, Buchanan and King remain the only bachelors among U.S. presidents and vice presidents. But of course, same-sex marriage didn’t become a universal legal right in the U.S. until a U.S.Supreme Court ruling in 2015.

In the TV interview, Buttigieg punted when asked to name a past gay president. “My gaydar even doesn’t work that well in the present, let alone retroactively.” he said. Undoubtedly, Buttigieg, a well-read fellow, knows about Buchanan’s background. But given that Buchanan is routinely ranked by historians among the very worst U.S. presidents ever, I can’t blame Buttigieg for relying on statistics rather than names. Not all precedents are good ones.