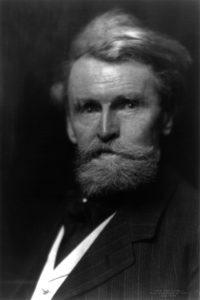 William A. Clark (via Wikipedia)

Origins of geographic names are so revealing. Seattle, where I lived before becoming New To Las Vegas, is named for an Indian chief even though gringo settlers later made it illegal for his tribe to live there. King County, in which Seattle sits, originally was named in 1852 for William Rufus Devane King, a newly elected vice president of the United States who died of tuberculosis just 47 days after taking office. But in 1986, lawmakers switched the basis to the persona of Dr. Martin Luther King Jr. after shockingly discovering–only 114 years later–Bill King had been a slaveholder who founded Selma, Ala. (The never-married King also was likely gay and in a relationship with likely gay and future never-married U.S. president James Buchanan, but that wasn’t a factor in the switch.)

Las Vegas is Spanish for “The Meadows.” The place already had that name when the future war criminal, U.S. military man John C. Frémont, first explored the largely unpopulated Mojave Desert area, then part of Mexico, on May 3, 1844. Writing that the spring water was too warm for drinking but wonderful for bathing, he later put Las Vegas on a government-issued map that eventually helped guide thousands of–yes, gringo settlers–to the West.

Fremont Street today is a major thoroughfare in Las Vegas. But the person who really put Las Vegas on the map is William A. Clark, for whom the county Las Vegas lies in is named. He has a fascinating background for someone whose name adorns a governmental subdivision. A tycoon who made his big fortune in copper mines, he was elected to the U.S. Senate in another state through big-money bribery, which, when exposed, cost him the seat. “I never bought a man who wasn’t for sale,” he is reported to have protested.

William Andrews Clark Sr. was born in Pennsylvania in 1839 but as a teen relocated with his family to Iowa. After teaching school and studying law, he moved to Montana in 1863 for its gold rush. First a miner, he became a trader, and then a banker, where, it seems, he specialized in foreclosing on distressed properties really worth more than their debt. He amassed a fortune in copper mines and smelting, which he used to finance ventures in other industries, including newspaper publishing.

A politician, Clark yearned to be in the U.S. Senate, and in 1899 was elected to it as a Democrat by the Montana Legislature. But a U.S. Senate committee refused to seat him, finding after rather colorful testimony about wads of cash being passed out that Clark had bought the seat with massive bribes to Montana lawmakers.

“Bribery, attempted bribery and corrupt practices” was the official verdict. It was determined that bribes totaling $431,000–about $12 million in today’s dollars–was handed out on Clark’s behalf. The case was so outrageous that it eventually helped pass the 17th Amendment to the U.S. Constitution, requiring that U.S. Senators be elected directly by the public. The thinking was that it would be a lot harder to bribe an entire state’s electorate.

Still, Clark managed to get elected again to the U.S. Senate by the Montana Legislature in 1901 and this time was seated. He served a single term until 1907. That was the same year Mark Twain, a political foe of Clark, wrote: “He is as rotten a human being as can be found anywhere under the flag; he is a shame to the American nation, and no one has helped to send him to the Senate who did not know that his proper place was the penitentiary, with a ball and chain on his legs. To my mind he is the most disgusting creature that the republic has produced since Tweed’s time.”

Still, it was during that single term that one of Clark’s many other business ventures made him a seminal figure in Las Vegas history. In 1901 he formed the San Pedro, Los Angeles and Salt Lake Railroad to built a line from the port of Los Angeles at San Pedro to Salt Lake City. Most of the route, sometimes called the Clark Road, was through unpopulated desert, and places with water were needed for maintenance yards. With those springs so noted by Frémont, Las Vegas was such a place. According to the 1900 census, the population was all of 25–meaning there was a lot of cheap land to be had.

In 1903 Clark’s railroad bought the old Stewart ranch, covering what is now downtown Las Vegas. On May 5, 1905, when the line opened, Clark himself was present for the frantic auction of 1,200 lots around the new Las Vegas train station, with bidders coming from Los Angeles on a special train.

That was the real start of Las Vegas, although it wouldn’t be until 1911 that the city was incorporated. That was two years after the state legislature put Clark’s name on a new sprawling county broken off from Lincoln County.

Clark himself never lived in Nevada or Clark County, alternating among mansions in Los Angeles, Montana and especially New York City. His home there at 962 Fifth Avenue, opposite Central Park, was the city’s largest, with 121 rooms, 31 baths, an indoor swimming pool, four art galleries and even a private underground railroad line to bring in coal for heating. He died there at age 86 in 1925, leaving behind an estate valued at as much as $250 million. At the time of his death he was considered one of the country’s 50 richest Americans ever. (His New York mansion was torn down two years later.)

He was survived by five children, one of whom, William A. Clark Jr., had founded the Los Angeles Philharmonic.  The youngest, Huguette Clark, died just six years ago in 2011 at age 104. Thanks to investigative reporter Bill Dedman, she drew notoriety as an eccentric recluse who lived her last 20-plus years in New York City hospitals rather than in other fancy properties she owned, including a mansion in Santa Barbara, Calif., a 52-acre estate in Connecticut and three New York City apartments. Along with distant Clark relative Paul Clark Newell, Dedman wrote a best-selling book–Empty Mansions: The Mysterious Life of Huguette Clark and the Spending of a Great American Fortune–that was almost as much about père as fille.

Given Las Vegas’s subsequent and long history as a venue for highly questionable activities, Clark County proved to be a perfect namesake for old Bill Clark.