With the New Hampshire Democratic presidential primary out of the way, attention is now turning in a big way to the next contest—Nevada’s own presidential caucuses on Saturday, February 22. Candidates, their handlers and the national media are pouring into the state and mainly Las Vegas, since almost all the state’s Democratic voters are here and it’s a lot more fun when on an expense account.

Here’s what they will see: giant billboards promoting excessive drinking, human sexuality (some in rather crude terms, to boot) and law firms making over-the-top claims.

Where else across the fruited plain can one experience a cityscape festooned with billboards openly lauding drunkenness, like the one displayed nearby from Lee’s Discount Liquor: “Booze is the answer. I don’t remember the question.”? Another from Lee’s reads, ” ‘Trust Me, You Look Great’–Alcohol.” 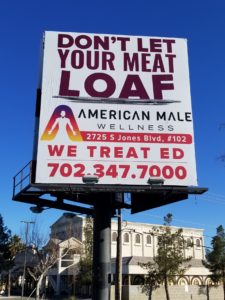 Or erectile dysfunction billboards loudly beseeching, “Don’t Let Your Meat Loaf.” Or a strip club billboard on a major freeway prominently displaying the image of a pussycat? Or giant ads promoting “The Love Store,” which sells sex toys?

Yes, Las Vegas definitely is a different place. The city’s image makers clearly were on to a universal truth when they recently changed their famous marketing slogan to, “What Happens Here, Only Happens Here.”

Billboards, of course, are just about everywhere in the U.S., except for Alaska, Hawaii, Maine and Vermont, where they are prohibited by law. I have lived or traveled in every state. I can’t remember any other area where billboards projected such a distinctive, anything-goes image.

For years, Lee’s Discount Liquor, which has 20 stores in the Las Vegas area and four others around the state, has been running cheeky billboards promoting excessive consumption. In 2013 the company took down a sign that said “Alcohol: It’s cheaper than therapy,” after complaints it was insensitive to victims of alcohol misuse. Frankly, I can’t see where the current signage is much better. 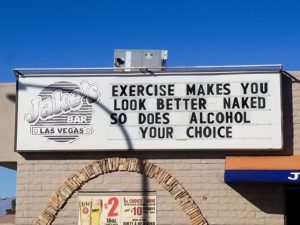 While Lee’s is the leading proponent of publicly promoting a large intake of alcohol, it is not alone. Jake’s Bar, which has a large and extremely visible changeable message board on its S. Maryland Parkway facility, recently bleeted, “Exercise Makes You Look Better Naked. So Does Alcohol. Your Choice.”

American Male Wellness, which posted the Meat Loaf ED billboard, has another one. It reads, “Erectile Dysfunction Is Reversible,” except that the last word is mirrored. Need action now? A billboard for Iuventus Medical Center proclaims, “Same Day Erectile Dysfunction Treatment” with a money-back guarantee. 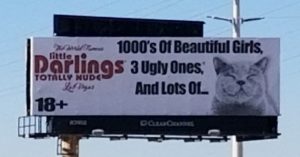 The billboard sporting the pussycat advertises the Little Darlings Totally Nude strip club. The sign I saw sits on U.S. 93-95/I-515, one of Las Vegas’ major freeways, and is rather jarring. I have seen vehicles with out-of-state plates–U.S. 93-95/I-515 is the major route into Las Vegas for traffic from Arizona and much of the U.S.–slow noticeably as they pass it.

But for all the raunchy advertising, there are far more billboards touting lawyers–sometimes nearly a dozen in a row along major freeways, and, I am sure, scores and scores around town. The U.S. Supreme Court in 1977 held that lawyer advertising was at least partially protected by the First Amendment. Las Vegas lawyers–there are more than 4,000 in the area, or one for every 400 adults–have a reputation of being very aggressive. This may be partly why my car insurance premiums skyrocketed when I became New To Las Vegas.

Some of the signs are reasonably dignified–a picture of the lawyer, a name, and a simple description like “personal injury lawyer.” More than a few, though, promote brash brand names or make what strike me as dubious pricing claims.

My personal favorite among the lawyer billboards is the billboard for a lawyer who uses the trade name Guard Dog Law. The sign contains what looks like half the face of a German shepherd. At first I thought this might be a practice specializing in folks attacked by escaped, out-of-control guard dogs. But since guard dogs are by definition defensive in nature, I was confused. However, after passing the sign on W. Desert Inn Road for the umpteenth time, I finally realized Guard Dog Law was an ordinary plaintiff personal injury operation.

So if the national TV media sense their audiences are tuning out the run-up to the Nevada caucuses, I suggest they tool around town and shoot billboards. The result won’t be boring.