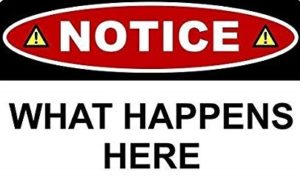 The Las Vegas Convention and Visitors Authority finally has gotten rid of the catchy, wildly successful marketing slogan that made up in cheekiness what it lacked in truth. I am referring, of course, to “What Happens Here, Stays Here,” which the taxpayer-funded promotional agency rolled out in 2003 to emphasize, I suppose, the adult freedom found in Sin City.

In its place, formally unveiled last month and touted in a network ad before yesterday’s Super Bowl LIV, is a subtle modification: “What Happens Here, Only Happens Here.” Frankly, I don’t know if this will be as successful. But at least it will have the advantage of being more true.

However, that could be a double-edged sword. It might emphasize events occurring here that other places wouldn’t want at all, like Britney Spears’ 55-hour marriage in 2004. Or, tragically, the 2017 massacre along the Las Vegas Strip that killed 58 and injured more than 500–most of them tourists–the deadliest mass shooting by one person in U.S. history.

As visitors to this space know, I have been spoofing the former slogan for years since becoming New To Las Vegas. Under the running title, “It Didn’t Stay Here,” I recounted story after story of folks getting in trouble elsewhere for something that happened in Las Vegas. You can see a list elsewhere on this page. In my view Las Vegas is quite the bug light for mischief.

The list is an eclectic roster, including some very big names. Donald Trump (partying here in 2013 with Russians), Joseph R. Biden Jr. (a little too touchy feely at a 2014 Las Vegas political rally), French President Emmanuel Macron (who led a free-spending trade delegation to Las Vegas in 2016) and Bill Cosby (convicted in Pennsylvania of sexual assault charges after testimony about events in Las Vegas). Of recent fame, I should add Lev Parnas, one-time Trump chum charged in New York with meeting in Las Vegas to plot illegal campaign contributions to Nevada politicians to enter the marijuana business.

But the bulk of my tales were more seemingly ordinary people doing things like spending embezzled funds in Las Vegas, accused of fooling around in Las Vegas or holding meetings here to further far-flung conspiracies. Not everything was criminal. My favorite story is that of Tia Smith, a jail guard from the New Jersey county where I was born and raised who was fired after phoning in sick from Las Vegas during a vacation.

Maybe the big marketing brains got nervous that their old slogan occasionally was proving to be too true. I am thinking especially about O.J. Simpson. He was acquitted of double murder in Los Angeles but convicted here in 2009 of robbery and kidnapping at the Palace Station hotel casino. But following his 2017 release after a nine-year prison sentence, he stayed in Las Vegas and is still here–amazingly, suing to protect whatever reputation he has left.

Or perhaps they got a little tired of the fodder they were giving other commentators. “What happens in Vegas stays in Vegas–except herpes,” stand-up comedian Artie Lange once cracked at the Hard Rock Cafe. Or someone’s suggestion for a new state motto: “Nevada: What Stays in Vegas Is Your Money.”

In explaining the change, Billy Vassiliadis, who heads R&R Partners, the firm that came up with the old slogan, told the Las Vegas Review-Journal, ““Even though the ‘stays here’ part didn’t feel contextual to this (younger) generation, they still had an affinity to the slogan. We couldn’t walk away from (the old phrase). But we had to contextualize it. We had to bring it into the 2020s.”

I have absolutely no idea what he means.

One advantage for someone like me looking through databases and the Internet for these tales of mischief is that news accounts and press releases by prosecutors about wrongdoing elsewhere tend to play up the Vegas angle if there is one. I don’t know that I’ve ever seen language like, “The defendant is accused of spending the allegedly embezzled funds in Cleveland.” But if Vegas is the venue, always.

The frequency with which Vegas pops up in such accounts reminds me of how often tony Harvard gets mentioned when its alums get in trouble with the law. Nearly two decades ago for Forbes, I had no problem searching public news databases to put together a lengthy table of Harvard Business School graduates convicted of various financial crimes. (The headline over the table was “Just Wondering Who Taught Them This Stuff.”)

With the new wording, perhaps you’re wondering if I am going to stop posting accounts of locally iffy behavior outed elsewhere. Hell no! As long as there are slot machines spinning, dice rolling, bartenders serving and airline service in Las Vegas, I will have lots of material to work with. But now I will be able to use each instance to laud the truth of the new slogan rather than criticize the falsity of the old one. How can it not be true that a lot of stuff that happens here would only happen here?

So maybe “It Didn’t Stay Here” simply will be renamed “It Did Happen Here.” Stay tuned.

William P. Barrett: Bill H, that the organization's telemarketers won't tell you its address pretty much tells you everything you need to kn...
Bill H: They're still at it as of April 8th 2021. I've been getting a robocall every day for the past two weeks. This is the f...
William P. Barrett: Michael, if he goes for the million-dollar ploy, make sure you ask for the address to which the check should be sent--an...
Michael: I got a call from Jason today and I told him that if he ever calls my phone again I would go after him and if I catch hi...
William P. Barrett: Keep us posted....
: I finally FINALLY decided to actually get to the bottom of "Jason". I answered, got to a live person, gave them the answ...
William P. Barrett: Jeff, the fact that other causes use the exact same script doesn't automatically mean they're all from the same organiza...
Jeff: This is a scam organization. They run numerous other pitches with this exact same script. Not only do they run this pitc...
William P. Barrett: Liz, the organization probably is afraid you or someone would tape the postage-paid envelope to a brick and mail it....
Liz: Yes, they are sleazy. I will print out your post and send it. Of course, they do not supply postage free return envelo...
William P. Barrett: Paul, judging from news accounts, Congressman Gaetz might have some other things on his mind. You might consider contact...
Paul Martin: I am in Florida and just got what seems like my hundredth call from Jason each time from a different number since I bloc...
William P. Barrett: Liz, these PACs that I call faux charities are pretty sleazy....
William P. Barrett: Liz, consider printing out and enclosing a copy of my post....
Liz: Liz again, I am also returning the pledge card with a note as to why I am not honoring my pledge: "After reviewing you...
Liz: I recently got a call (3/8/21) from the American Coalition for Autistic Children PAC asking for a contribution. My stan...
William P. Barrett: Rieve, yes, the Mastroianni operation is really something....
Rieve: Just stopped my 71 year old father in law from sending in a donation. I write out his bills for him and I'd never heard ...
William P. Barrett: Mac, I haven't heard of any criminal prosecutions, much less jailings....
Mac: Jason is still doing his scams in Florida I just had call from him . I thought he was in jail along with his friend P...
William P. Barrett: Why?...
: GO BACK TO SEATTLE!...
William P. Barrett: Kay, that's what I sometimes tell the many callers peddling extended car warranties; I just signed up with another and c...
Kay: I get calls at least twice a week from Energy Advocates. I’m at the point where I play along and then tell them I jus...
William P. Barrett: Sylvia, I don't know where you live, but you might consider complaining to whoever regulates charitable solicitations in...
Sylvia Ahern: Thank you! My husband, who has mild dementia AND an autistic grandchild, got snookered. Despite that he actually paid on...
John McCauley: I keep getting these ridiculous robocalls. I have asked at least a dozen times to be put on a do not call list. If I ke...
Stephanie Harrington: I just received a call from Jason with Energy Advocates out of Paxton FL. I could tell it was a computer generated so I...
William P. Barrett: Bemore, wonder if you could complain to the agency that gave you the phone....
Bemore: I have been homeless for a year and get calls from that idiot daily, I don't have a job and barely enough in one to keep...