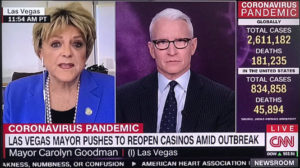 Several hours ago, three-term Las Vegas Mayor Carolyn Goodman made an absolute fool of herself on national TV by telling CNN’s Anderson Cooper the coronavirus shutdown of the economy should be ended, but she has no responsibility for any sickness or death that might result. She added she had offered her city as a”control group” to see how many residents would die, but was turned down by authorities.

I’ve been getting angry messages from people complaining about “your mayor.”

But there’s some interesting history here–even involving the former bread-and-butter of Goodman’s now-retired mob lawyer husband, Oscar Goodman, who also served as Las Vegas mayor. I described the backstory in a 2017 post. I’m taking the liberty of re-purposing some of that material below.

Not only is the Strip not in the City of Las Vegas, neither is the main campus of the University of Nevada, Las Vegas. Or the Las Vegas Convention Center. Or even the famous “Welcome to Fabulous Las Vegas” sign, a photo of which graces the top of this blog. The about-to-be-built stadium for the NFL’s transplanted Las Vegas Raiders? Nope.

You may have seen over the years any number of photos of Oscar Goodman–Carolyn’s hubby, who in his legal heyday defended some of the Strip’s most famous mobsters–sipping a cocktail in the presence of Strip showgirls. You might think he had some official jurisdiction and authority over the Strip. You would be dead wrong. There’s even a pretty good chance such photos weren’t taken in the City of Las Vegas or the Strip.

The Strip is a 4.2-mile-long portion of Las Vegas Boulevard South running in a southerly direction from Sahara Avenue to Russell Road, next to the airport where the Las Vegas welcome sign draws thousands of tourists daily for photo ops (when there’s no coronavirus). As it happens, Sahara Avenue is the southern boundary of the City of Las Vegas. The city runs for miles and miles north, east and west–but not south, so there is no overlap with the Strip.

The City of Las Vegas was founded in the middle of the unpopulated Mojave Desert in 1905 when corrupt tycoon and U.S. Senator (from Montana) William A. Clark Sr. needed a division point with water for the San Pedro, Los Angeles and Salt Lake Railroad he was building. The city was formally incorporated in 1911 two years after Clark’s name went on the county. By 2000, Las Vegas had become the most populous U.S. city founded in the 20th century (Chicago, in case you wonder, had that honor for the 19th century). But the Las Vegas population today, 650,000, is not even one quarter of the 2.7 million people living in the greater Las Vegas metropolitan area, which includes the Las Vegas Valley.

Nevada legalized casino gambling (as well as quickie marriage and divorce) in 1931. Most of the early gambling halls were clustered around the train station in downtown Las Vegas on Fremont Street (named for a war criminal) and along what came to be known as Las Vegas Boulevard. Downtown Las Vegas continues to be a major center of gambling, and it is in the City of Las Vegas.

But starting in the 1940s new casino operators–i.e. mobsters–wanted to open lavish resorts with more land and facilities (and with questionable financing). They also wanted to get away from what some thought were Las Vegas taxes that were too high. Hey, even organized crime was sensitive to overhead. So the thugs started building outside the city limits along Las Vegas Boulevard South, south of Sahara Avenue, which back then was called San Francisco Avenue. At the time it was all an empty stretch of desert.

But boy did that change. Eventually, the Strip got all the big-name casino hotels and all the fame. Caesars Palace, the Flamingo, the Bellagio, Wynn/Encore, Venetian, Palazzo, Mirage, MGM Grand, Tropicana, Mandalay Bay, Luxor, Cosmopolitan, Treasure Island, Bally’s, to name but a few today.

Seeing its tax base being dissipated, the city of Las Vegas at various times tried to annex the Strip, with no success. One notable effort came in 1950. Local mobster Gus Greenbaum actually led a successful push for the Clark County Commission to declare the area containing the Strip part of Paradise Township, which under state law could not be annexed by Las Vegas without county approval. (Greenbaum, who ran several casinos for the mob and was a model for a character in the movie “The Godfather,” was murdered gangland-style in 1958.)

Another effort came in 1975 when the state Legislature passed a law merging the City of Las Vegas and Paradise, where most of the Strip is. By that time the mob with its offers that couldn’t be refused was largely gone from the Strip. Still, the Nevada Supreme Court struck that down as unconstitutional.

The tax issues remain significant. Property taxes go up 20% or so when land in unincorporated Clark County not part of named townships is annexed by the City of Las Vegas. In the past few years Las Vegas has annexed something like seven square miles. One result of this is a crazy quilt pattern on the northwest side of Las Vegas, where one parcel might be in the city but the next one not. There are actually 12 square miles of unincorporated Clark County completely surrounded by City of Las Vegas territory.

But not along the Las Vegas Strip. Which, admittedly, is way cooler than calling it the Clark County Strip, or even the Paradise Strip. And it’s certainly not Carolyn Goodman’s Strip.