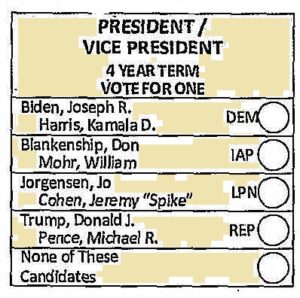 Ballot in a Las Vegas precinct

John Bolton is the mustached conservative stalwart who served as President Donald J. Trump’s national security advisor for 17 tumultuous months and then wrote a best-selling book attacking his boss, The Room Where It Happened. In a recent interview, Bolton says he won’t vote for Trump, and of course not for Joseph R. Biden Jr. Instead, he declared he would write in the name of a “Republican conservative yet to be determined.”

It’s a good thing for Bolton he lives in Maryland and not here in Nevada. That’s because the Silver State, alone among the 50, prohibits write-in votes. Instead, for statewide races voters are given the option of choosing “None of These Candidates.”

In the past the NOTC option has influenced the outcome of races in Nevada. This year it could even do so nationally in the presidential contest.

Nevada political experts think NOTC siphons far more regular votes from Republican candidates than it does from Democratic candidates. Indeed, the Republican National Committee once supported a failed lawsuit to get NOTC off the ballot.

Four years ago, Hillary Clinton captured Nevada with 27,020 more votes than Trump. Her margin of victory was less than the 28,863 votes cast for NOTC. However, she was probably aided even more by the 37,384 votes that went to Libertarian candidate Gary Johnson, who is thought to have drawn more from disaffected Republicans.

The “None of These Candidates” option was added by the Nevada Legislature in 1975–the year after Richard Nixon resigned his presidency in the aftermath of the Watergate scandal–supposedly as a way of attracting alienated voters who otherwise might not vote. The preamble to the legislation stated the intent was so that “any voter may express his lack of confidence in presidential candidates or candidates for statewide office.”

The law also required that the total of NOTC votes be included “in every posting, abstract and proclamation of the results of the election.” An official public shaming.

By law, NOTC votes don’t count. That was a good thing in 2014 for Bob Goodman of Las Vegas when he sought the Democratic nomination for governor. In the eight-candidate primary, Goodman led with 17,961 votes. or 24.8% of the total. But NOTC polled 21,725 votes, or 30.0% of the total. Since NOTC was not a person, the winning nominee was Goodman. (For some reason the situation reminds me of 1976 when, working as a reporter for a Philadelphia newspaper long before becoming New To Las Vegas, I watched a local candidate for Congress lose a primary election to a veteran incumbent sharing my name who had died several weeks earlier.)

In the fall 2014 general election Goodman was trounced 71% to 24% by the very real incumbent Republican governor, Brian Sandoval. At least Goodman finally ran ahead of NOTC, which clocked in at 3%.

It was in 2012 that Nevada GOP-ers backed by the national party sued to block the NOTC line from appearing on the ballot. A federal district judge ruled for the Republicans on their claim that NOTC was unconstitutional. But a federal appeals court stayed that decision and later dismissed the lawsuit on grounds the plaintiffs lacked standing to sue. The U.S. Supreme Court let that dismissal stand.

As it turns out that year, NOTC probably made no difference at the top in Nevada. Barack Obama beat Mitt Romney by 67,806 votes; NOTC garnered just 5,770 votes.

Before Las Vegas, I lived in Seattle, where ballots allow write-in votes. Still, at my last general election in 2014 election officials actually sent voters written notices stating, “Please, don’t write ‘none of the above’ or a frivolous name such as Mickey Mouse or Bigfoot on the write-in line.”

Now I though that was high-handed. To me, a write-in vote for a cartoon character or an imaginary monster, both with no chance of winning, nevertheless makes a valid political statement. I would prefer the flexibility of write-ins to NOTC.

Besides Trump and Biden, there are two other presidential candidates on the Nevada ballot. Running on the line of the far-right Constitution Party is Don Blankenship. A former coal company president in West Virginia, he was found guilty of a misdemeanor charge of plotting to willfully violate mine safety and health standards in relation to a mine explosion, and spent a year in prison. I suppose you could call him a man of conviction.

The Libertarian Party candidate is Jo Jorgensen, a psychology professor in South Carolina. She has even less name recognition than Gary Johnson, who was my governor for eight of the 12 years I lived in New Mexico.

Are you a John Bolton-style voter in Nevada? Without the ability to write in names, the presidential pickings are rather slim. At least there are always the casinos.