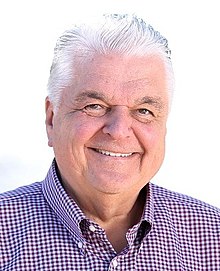 I am hunkered down in the New To Las Vegas world headquarters waiting out the worsening coronavirus pandemic per the explicit request of our governor, Steve Sisolak. Yet he also says it’s okay for tourists to wander around the Strip and other places like casinos, presumably spending money brought in from out-of-state.

To me, this is not okay at all. But it’s the kind of mentality on which the Las Vegas economy has been based since gambling and quickie divorce (as well as quickie marriage) were all legalized in the same fateful year of 1931. Profit from the moral shortcomings of others, and to hell with the consequences.

On November 10, Sisolak, a first-term moderate Democrat who likely will face a tough re-election battle in 2022, announced “Stay At Home 2.0.”  He called for all Nevadans (although more than 70% of them live in and around Las Vegas) to voluntarily stay at home as much as possible for two weeks, somewhat mimicking a much longer mandatory order he made in March.

I don’t have a problem with that. Yet at the same time Sisolak said it was all right for tourists to be out and about–so long, of course, as they wear masks and practice social distancing.“They certainly should come because those are protecting our jobs,” he declared at a press conference.

In any event, “Stay at Home 2.0” doesn’t seem to be working too well. At this writing, coronavirus rates, like the rest of the country, are way up. It’s so bad in Nevada that even Sisolak, 66, just announced he tested positive for coronavirus and will quarantine in the Governor’s Mansion in Carson City.

As I see it, Sisolak is not a bad guy at all. But he’s caught up in an iffy culture. Nevada is a minimal tax, minimal government state where the official routine has been to discourage much in the way of economic development outside the gambling/hospitality/entertainment sector lest it require higher taxes. Especially on rich folks.

After all these decides, the result is a desert terrain of inadequate health care and poor public education.

Not that some local leaders don’t talk a good game. As I wrote here in March, after the Great Recession starting in 2008, which hit the Las Vegas area particularly hard,  poobahs called for an emphasis on economic diversification toward a knowledge-based tech-driven economy. Away from the one-trick pony of sin stuff that draws tourists but is extraordinarily susceptible to national downturns–and orders to maintain social distancing.

Twelve years later? According to the U.S. Bureau of Labor Statistics, the Las Vegas area added all of 100 information technology jobs while decreasing the percentage of workers in the leisure and hospitality sector (which include the casinos), by just 1½ percentage points. It’s still by far the highest of any major population area.

In Las Vegas there is an excessive preoccupation on the Las Vegas Strip–the main cash cow–almost to the exclusion of the common good. Here’s another example.

Over the past few months there have been a spate of stories in the local media about rising violent crime along the Strip and environs. The incidents are especially noticeable given the pandemic-caused drop in tourism and business travelers. Clark County Sheriff Joe Lombardo, who oversees the local police department, has pledged to increase patrols. Individual casino/hotel properties have promised to step up procedures.

But here’s my question: Why isn’t there similar outrage among the media and public officials about the high rate of crime over the 99% of the Las Vegas Valley that doesn’t comprise the Strip? Could it have something to do with the notion that the worker bees who live here are viewed as mere cost centers, unlike the Strip, which is perceived as a profit center, and thus more worthy of more protection?

The overall data really isn’t much in dispute. According to the Federal Bureau of Investigation’s latest Uniform Crime Reports, for 2019, the serious crime rate (murder, rape, robbery and aggravated assault) for the entire country was 367 incidents for every 100,000 residents. In Clark County, where the Strip is located, the serious crime rate was 526 incidents for every 100,000 residents. That’s a stiff 43% above the national rate.

Since crime rates are calculated on the basis of residents, and relatively few people live around the Strip, it’s essentially impossible to calculate comparable crime rates for the Strip. But by all accounts the rise along the Strip is a temporary blip, while the elevated crime rate across across the entire Las Vegas Valley has persisted for years.

Now, after a gut-wrenching drop, tourism is slowing returning to Las Vegas. Although from what I can tell, it’s mainly people driving here from California rather than people flying in from everywhere, which normally is 75% of the traffic. But state health officials just announced that more than 700 out-of-state visitors to Nevada has tested positive for coronavirus since casinos reopened in early June after a two-month shutdown.

Still, the casinos are surely trying, with partitions, regular disinfecting, social distancing and mandatory masks now part of the regular routine. The bigger problem might be the many maskless tourists walking and lingering in close proximity along the Strip and downtown Las Vegas, another gambling center.

Right now, the Sisolak mantra seems to be “Don’t Discourage Tourists.” This should replace the official state motto, “All for Our Country,” which the Nevada legislature adopted in the wake of the Civil War in 1866. Such a replacement at least would have the benefit of being a lot more honest.