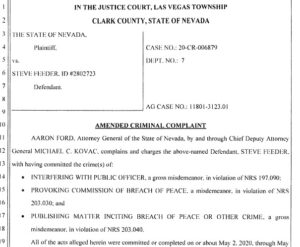 With its constant, often mindless criticism of all regulation and taxes–in a state with crushing unmet social needs–the Las Vegas Review-Journal editorial page is often a hard read for me. But I find myself in agreement with its recent criticism of efforts by Nevada Attorney General Aaron Ford to shut down a vociferous critic of his fellow Democrat, Governor Steve Sisolak.

State prosecutors filed three criminal misdemeanor charges against Steve Feeder, a 60-year-old Las Vegas resident, for his strong rant, mainly on Sisolak’s official Facebook page, against Sisolak and his early handling of the coronavirus pandemic in closing certain kinds of businesses. A Las Vegas judge, Karen Bennett-Haron, threw out two of the charges–interfering with a public official and provoking commission of a breach of the peace. But she ordered a trial next spring on the third charge, publishing matter inciting breach of peace or other crimes.

This raises obvious First Amendment freedom of speech issues. The Review-Journal editorial declared, “There’s no evidence that Mr. Feeder did anything other than post his incendiary bluster on social media.”  I fully agree. But for me, the biggest problem with Ford’s bid to shut up criticism of Sisolak is the very law itself. Any century-old law–this one was enacted in 1911, and not one word has been changed since–is susceptible to challenge, especially one that criminalizes speech. However, it strikes me that this one has a serious constitutional deficiency, which I haven’t seen raised in the court filings I see online and which I will explain below.

But first, what did Feeder write? The online Nevada Independent, which first broke news of the case, wrote this summary:

Several of his comments made unspecified violent calls to action against the state’s Democratic governor.

“In any WAR which we are now in sheep will be casualties but we must March on,” he wrote in one comment on a May 19 post regarding the number of COVID-19 tests in the state. “If you enjoy getting [f*cked] in the SPHINCTER each morning continue to write here and get no results. It’s time to fight back. If not say hello to your new TYRANT leader.”

Other incendiary remarks posted on Facebook by Feeder and cited by state prosecutors include more than three dozen instances of leaving a comment telling people to “arm themselves, form a militia, and go to war with the government,” a photo of Sisolak superimposed as a Nazi, and a GIF moving image of a gun pointed at a man’s head with the caption “I thought I saw John Wilkes Booth in the house.”

Strong stuff. But I’m not sure it’s too far off from material President Donald J. Trump has tweeted or retweeted. In any event, there doesn’t seem to be any evidence that Feeder’s calls have prompted anything.

Still, as Chief Deputy Attorney General Michael Kovac wrote in a brief, “Defendant’s statements are not protected by the First Amendment; nor are they protected by Defendant’s ignorant understanding of the concept of tyranny. Instead, they are deliberate and dangerous statements that create an intolerable risk to the health and safety of our democratically elected officials.”

Which brings me to the constitutional deficiency I perceive in the 1911 law, known as Nevada Revised Statutes 203.040, section 1. Here in its entirety is the text:

Every person who shall willfully print, publish, edit, issue, or knowingly circulate, sell, distribute or display any book, paper, document or written or printed matter, in any form, advocating, encouraging or inciting or having a tendency to encourage or incite the commission of any crime, breach of the peace, or act of violence, or which shall tend to encourage or advocate disrespect for law or for any court or courts of justice, shall be guilty of a gross misdemeanor.

Long before becoming New To Las Vegas, I went to law school (indeed, I’m still admitted to the bar of two states). In constitutional law, we learned about the Overbreadth Doctrine as applied to the First Amendment. This is a line of U.S. Supreme Court cases holding that someone being prosecuted for speech who asserts a First Amendment right can win if the specific law criminalizes protected speech as well as unprotected (i.e. inciting violence) speech, even if the person only uttered the unprotected speech. In effect, the Overbreadth Doctrine allows the accused to claim the law violates the First Amendment rights of others.

Take a close look at the last portion of the single-sentence law I just quoted. That sentence criminalizes writings that “tend to encourage or advocate disrespect for … any court or courts of justice.” These days, that is clearly protected speech. Otherwise, Trump’s recent Twitter rants about courts ruling against his re-election bid would expose him (after he leaves office next month) to criminal liability in Nevada, where his tweets undoubtedly were read.

Hell, I could be liable for my previous unfavorable writings about Haron-Bennett, the judge who sent the Feeder case to trial. I wrote that she let Jarrid Johnson, a clearly mentally ill man accused of using a sword to commit battery against a family member, out of jail without eyeballing him maybe 36 hours before, according to court records, he killed a homeless man, Ralph Franzello, on a street in the dead of night. Why did I even know about this case? Because I’m the person who, walking the dog, found Franzello’s lifeless body two years ago next week as the sun was coming up on the year’s shortest day and notified authorities. The case is still pending.

Getting back to Feeder, the Nevada Attorney General’s Office quoted only part of the aforementioned Section 1 sentence in its charging document. I can understand why. Government often leaves out the bad stuff, by which I mean material hurting its case. Here’s hoping folks get up to speed on the Overbreadth Doctrine, and this case gets the final heave-ho.

Then the Review-Journal, which has a wildly unsuccessful record when it comes to endorsing candidates in major competitive races (backing Trump as well as opponents to Sisolak and Ford), can finally claim a meaningful editorial-page victory.