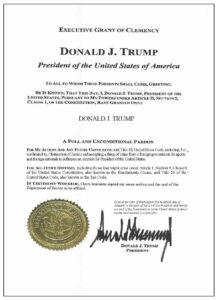 Now that the presidential election is decided, the Chattering Classes are now fixated on other pressing issues. Will President Donald J. Trump pardon himself? Can he pardon himself? If not, will he resign on January 19 and let president-for-a-day Mike Pence pardon him? Would the politically ambitious Pence really be willing to risk pulling a President Gerald Ford, who lost his own bid for election in 1976 after pardoning disgraced president Richard Nixon two years earlier?

And whatever the source, would any valid pardon in favor of Trump amount to an admission of his culpability for a wide range of  issues? Issues that include obstruction of justice, tax fraud, campaign finance irregularities involving ex-paramour payments and wholesale violations of the Emoluments Clauses?

As a student of constitutional law long before becoming New To Law Vegas, I would tell you Trump can’t pardon himself, for two simple reasons. First, self-pardons were unknown in English common law, on which our Constitution was based, with substantial modifications, upon its creation in 1787. Second, the specific wording of the relevant Constitutional clause–giving Trump the “Power to grant … pardons”–bars a self-pardon because by dictionary definition one can only “grant” something to someone else. (i.e. taking money from your left pocket and putting it in your right pocket is not a “grant” to yourself).

Still, should Trump end up with a self-pardon and later be federally indicted, it would be up to the courts to sort that out. And probably, eventually, the U.S. Supreme Court.

But on the cultural/political issue of whether accepting a pardon would an admission of personal culpability on the part of the recipient, the Supremes already have spoken. It is. Quite strikingly, the century-old case establishing this tarring proposition involved reporting by major-media investigative journalists producing what Trump might call  “fake news.” They bravely stood up to a president (Woodrow Wilson) in coverage touching on suspected tax fraud and marital infidelity. These are all topics not unassociated with Trump.

Folks, it’s hard to make up stuff like this. If I’ve caught your interest, read on. It’s a pretty good yarn.

The year was 1913. The city: New York. One of the country’s prominent newspapers was the New-York Tribune. The paper was founded in 1841 by later-to-run-for-President Horace (“Go West, Young Man”) Greeley, and once employed Karl Marx as its European correspondent. The Tribune long had been a mainstay of Republican politics.

In December of 1913, overseen by city editor George Burdick, shipping editor William Curtin broke a couple of big juicy stories. Ex-Congressman Lucius Littauer and his brother, William, were under investigation for conspiracy to defraud and smuggle into the country from Europe $40,000 of jewelry (worth $1 million in 2020 dollars) without paying the required taxes.

In a separate case, wealthy New York leather company heir Robert Heitmeyer (sometimes spelled Heitemeyer) and companion Edna Mayer Alexander faced criminal liability for trying to smuggle a diamond and sapphire pendant under her coat without paying duty after they returned on the liner La France from a long European trip together. At the time he was married, but not to her. His wife was suing for divorce and had named Alexander, a divorcee, as the other woman. Alexander’s ex-husband already had gotten a divorce after naming Heitmeyer as the other man. This all occasioned a fair amount of lurid coverage in the popular press.

It appeared the leaks to the Tribune had come out straight out of the New York Custom House in lower Manhattan, which Curtin covered. Federal authorities were not amused. Prosecutors in the Southern District of New York–the same office whose heads Trump would fire a century later–empaneled a grand jury to determine the leakers. Criminal charges were brought against “John Doe” and “Richard Roe.” Burdick and Curtin were then subpenaed. Both refused to answer questions, citing their right under the Fifth Amendment to avoid self-incrimination. (It seems prosecutors thought the Tribune might had paid for the information, raising the prospect of bribery of public employees.)

On February 19, 1914, Burdick and Curtin returned under subpena to the grand jury room. But this time they were presented with unconditional pardons that Wilson (a Democrat) had signed a week earlier in an effort to make them talk. (The now-standard tool of prosecutors on their own authority granting witness immunity was then still uncommon.) As the pardon for Burdick declared:

I, Woodrow Wilson, President of the United States of America, in consideration of the premises, divers other good and sufficient reasons me thereunto moving, do hereby grant unto the said George Burdick a full and unconditional pardon for all offenses against the United States which he, the said George Burdick, has committed or may have committed, or taken part in, in connection with the securing, writing about, or assisting in the publication of the information so incorporated in the aforementioned article, and in connection with any other article, matter, or thing concerning which he may be interrogated in the said grand jury proceeding, thereby absolving him from the consequences of every such criminal act.

Since they couldn’t be charged with anything, Wilson and prosecutors thought, the journalists could not incriminate themselves and would have to talk. But as The New York Times reported the next day, Burdick and Curtin retired to a private room to confer, then returned to the grand jury room and said they would not testify. Deputy U.S. Attorney Frank Carstarphan indignantly complained, “They withdrew, leaving the President’s warrant of pardon lying on the table!” The famous Judge Learned Hand, then of U.S. District Court, held Burdick and Curtin in contempt and fined them $500 each ($13,000 in today’s dollars).

The case made its way up to the U.S. Supreme Court on the issue of whether Burdick and Curtin had the right to refuse an unconditional pardon. They argued that taking the pardon connoted wrongdoing, an implication they said they could not live with. Hogwash, the government’s appellate team said, it’s not their call.

On January 25, 1915, the court unanimously agreed with the journalists, overruling Hand and dismissing the contempt citations. A pardon “carries an imputation of guilt; acceptance a confession of it,” conservative Justice Joseph McKenna wrote for the court in Burdick v. U.S. A pardon must be accepted by the recipient to take effect. Quoting an earlier case, he wrote, “‘A pardon is a deed, to the validity of which delivery is essential, and delivery is not complete without acceptance. It may then be rejected by the person to whom it is tendered; and if it be rejected, we have discovered no power in a court to force it on him.'”

The decision was hailed at the time as a great victory for freedom of the press, although the case was not really argued or decided on that ground. Burdick spent another 35 years in journalism, retiring in 1950 as managing editor of the Newport Daily News, in the Rhode Island city where he grew up. Burdick died in 1958 at age 79. The New-York Tribune became the New York Herald Tribune in 1924, then the World Journal Tribune in 1966 before permanently giving up the ghost a year later at age 125.

As for the subjects of the Tribune‘s reporting, ex-Congressman Littauer and his brother pleaded guilty. Each received a $1,000 fine ($26,000 in current dollars) and a six-month suspended jail sentence. Leather tycoon Heitmeyer and mistress Alexander each also paid fines of $1,000. It was separately reported Heitmeyer later fled to Europe to avoid paying alimony to his estranged wife, though whether Alexander came along is unknown.

In recent days, journalist Bob Woodward has recounted on cable news shows and in other forums a story about when he interviewed Gerald Ford in 1998. Woodward asked Ford why he never pressed Nixon for an admission of guilt when pardoning him. In justification, Ford reached into his wallet and pulled out a yellow clipping about an old Supreme Court decision standing for the proposition that to accept a pardon (which Nixon did) amounts to an automatic admission of guilt. That case was Burdick v. U.S.

It’s not likely the backstory of Burdick–crusading journalists protecting sources defiantly rejecting a presidential pardon implying guilt–would be appealing to Trump. So if he somehow does end up with a guilt-implying pardon, from Pence or himself, the irony and even hypocrisy would be truly breathtaking.