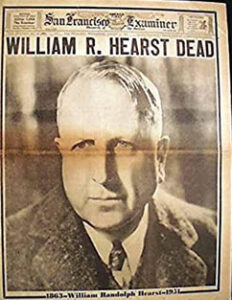 Want to have a nice, expansive newspaper obituary written about you after your death? It helps to own the newspaper.

The day after Las Vegas casino billionaire Sheldon Adelson died last week at age 87, the Las Vegas Review-Journal, which his family owns, ran what it called a “10-page special section” behind a color photo taking up half the front page. I imagine no paper in the world beyond, perhaps, the two his family owns in Israel devoted more space to Adelson’s passing. It more than reminded me of the over-the-top play Hearst newspapers gave chain founder William Randolph Hearst, the flamboyant inspiration for Orson Welles’ famous movie, “Citizen Kane,” when Hearst died in 1951 at age 88. I’ll get back to this in a bit.

By contrast, the death a few days after Adelson’s of Siegfried Fischbacher, the 81-year-old remaining survivor of the wildly successful, long-running Las Vegas tiger-festooned magic act of Siegfried & Roy, warranted only three pages in the RJ. But even that was a lot more than the coverage the RJ gave former president George H.W. Bush after he died in 2018 at age 95. Although the Cold War ended on his watch, Bush 41 received only a measly page-and-a-half in the RJ.

To me, anyway, as significant as the amount of space the RJ devoted to Adelson was the content of the copy. Judging from some of the obituaries published over the past week by other outlets not owned by the Adelson family, a certain amount of unpleasant material about the departed tycoon was left out.

All the coverage, the RJ‘s included, described Adelson’s rise from a tough-neighborhood hard-scrabble childhood in Boston to the world’s 38th richest person, with a fortune Forbes estimates at $35 billion. The stories correctly credited Adelson’s smarts in realizing before others the synergy in Las Vegas between casinos and conventions, as well as spotting the potential for fabulous growth in the China enclave of Macau. He also was lauded for, during the ongoing pandemic, paying full salaries to 11,000 workers around his Las Vegas Sands Corp. without resorting to mass layoffs, unlike many of his Las Vegas competitors. His many philanthropic contributions were noted. The copy also cited his vast financial support for right-wing causes in the U.S. and Israel.

The obituary in The New York Times by Robert D. McFadden, a Pulitzer Prize-winning rewriteman just four years younger than Adelson, pointed out that the tycoon bought the RJ in 2015 using a shell company “to hide his involvement” and that “he was revealed as the buyer by his own newspaper,” some of whose staffers soon departed. These embarrassing facts were not in that 10-page RJ “special section.”

The long Los Angeles Times obit was written by Steve Chawkins, an obituary writer who actually left the paper six years ago. The article mentioned that long before buying the RJ, Adelson filed a libel suit against a columnist on the paper, John L. Smith, who was forced into bankruptcy “just as his young daughter was undergoing treatment for brain cancer.” Although not mentioned in the obit, Adelson’s case was eventually dismissed, and the judge ordered Adelson to pick up Smith’s costs and expenses.

Chawkins also noted that Adelson was once sued by two sons from his first marriage who claimed he had cheated them in a transaction of company stock. In Chawkins’s telling, “A Massachusetts judge ruled that Adelson, while ‘perhaps lacking paternal kindliness,’ had not defrauded or misled his sons.” Finally, wrote Chawkins, “A lawsuit accused him [Adelson] of ‘legal sadism’ for needlessly prolonging legal proceedings to weaken his adversaries.”

There was not a word about any of this in the RJ.

The obituary in The Wall Street Journal by James R. Hagerty and Alexandra Berzon reported that Adelson once had sued the paper’s Kate O’Keeffe, a hard-nosed gambling reporter in Hong Kong, for libel. In a settlement ending the case, the obit said, “the Journal didn’t pay Adelson any money or make any changes to the story in question.” A link in the online version of the obit to the 2017 settlement story in the Journal was illuminating. Adelson’s libel suit alleged that the original story O’Keeffe co-wrote in 2012 falsely said he was “foul-mouthed,” which isn’t much of a defamation claim. But the settlement story quoted court filings implying that Adelson had brought the libel suit against O’Keeffe, but not the paper or her co-author, hoping to create a conflict-of-interest that would force her to stop covering Adelson. It didn’t work.

Again, this was not mentioned in the RJ.

Other outlets–but again, not the RJ–brought up some other inconvenient legal matters. One was the $47 million fine that Adelson’s business paid in 2013 to avoid criminal charges in a money-laundering investigation. Another was the $75 million paid to settle a wrongful termination lawsuit brought by a fired executive who leveled accusations of wrongdoing.

As is my standing custom, I welcome everyone to add below their two cents on my perspective.

The inspiration for this post is an article I read long before becoming New To Las Vegas. It was a reprint of a September 8, 1951, story by the famous press critic A.J. Liebling in The New Yorker after Hearst’s death, which ended his controversial 64-year foray into journalism. The article looked at the lavish, uncritical coverage Hearst’s passing received in his chain of 16 sensation-seeking daily newspapers–some of which, Liebling wrote, “read more like a stock prospectus.” Liebling then detailed at some length the more sober coverage of other newspapers, focusing on what was left out of the Hearst coverage of Hearst. In Liebling’s view the gap was considerable.

As it turned out, Hearst and Adelson died 70 years apart only a few miles from each other in tony California real estate, Hearst in Beverly Hills and Adelson just up the coast in Malibu. Unlike, say, the next-day New York Times story, the Hearst newspaper coverage of Hearst’s death did not mention that his long-time mistress, Marion Davies, was at his bedside as he passed rather than his long-estranged wife. It helps to own the newspaper.