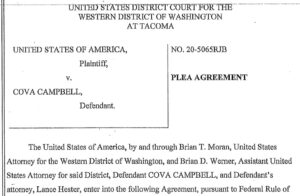 Sitting in the considerable shadow of just-up-the-road Seattle, Tacoma, Wash., nevertheless is noteworthy for a couple of things. In the late 19th century it grandly styled itself “City of Destiny,” a nickname that still persists although the town never really lived up to that hype. There’s the spectacular 1940 collapse just four months after its opening of the Tacoma Narrows Bridge over Puget Sound, at the time the world’s third-longest suspension bridge. The city gets second billing at Seattle-Tacoma International Airport, but at least it’s a major, well-known facility. With a population of 218,000, Tacoma is bigger than all but 100 other U.S. cities.

Recently, Tacoma, seat of Pierce County, was the site of a big crime. Nearly $7 million was pilfered from the Pierce County Housing Authority by Cova Campbell, the agency’s long-time finance director. It’s been called the biggest embezzlement of public funds in Washington State history.

Why, you might ask, is this of any interest to the New To Las Vegas world headquarters? I’m going to let you guess where some of the stolen loot was spent.

Yes, Campbell becomes the newest candidate for my list, It Didn’t Stay Here. This is a gallery of folks who got into trouble someplace else for something that happened in Las Vegas (in this instance, the spending of ill-gotten gain in that bug light of iniquity also known as Sin City). The roster is a refutation of “What Happens Here, Stays Here,” for many years the famous promotional slogan of the Las Vegas Convention and Visitors Authority. The full list can be found elsewhere on this page.

This account come from court records, official government statements and news media reports. Campbell herself just pleaded guilty to wire fraud. She agreed to pay $6,997,486.85 in restitution and costs and faces up to 20 years in prison when she is sentenced in early April in the local U.S. District Court.

According to her plea agreement, which she signed, Campbell used some of the stolen money “to pay for travel, including a trip to Las Vegas and for the use of a private jet. She used other diverted money to pay for gambling and internet gaming.” Although the public record lacks detail, I’d say it’s a fair bet some of that gambling took place in Las Vegas. The press release issued by the U.S. Attorney’s Office in Seattle said the amount of stolen money spent for gambling was “large.”

Besides Las Vegas, Campbell had a lot of other uses for the money. According to filings, she acquired land in Oklahoma, fixed up her house in suburban Tacoma and bought cars.

According to filings, Campbell became the housing authority’s finance director in 1999, but it was only in 2016 that the thefts began. They were uncovered by a routine state audit in 2019, and Campbell was promptly fired.

The $7 million Campbell admitted taking amounted to about 7% of the roughly $100 million that passed during that period through the housing authority, which operates rental housing projects and provides income assistance for low-income folks with grants from state and federal sources. So proportionately, that’s a huge heist. Officials said Campbell got away with it by starting small–personal charges on agency credit cards–and then moving up to phony vendor payments and eventually large wire transfers to an out-of-state bank. Auditors found those payments coincided with Campbell’s Oklahoma land purchases.

After Campbell’s guilty plea last month, her lawyer, Lance Hester, was quoted in The News Tribune of Tacoma as saying, “Ms. Campbell has taken responsibility for her actions by entering a plea today. Over the past year she has fully cooperated during [the housing authority’s] civil efforts to recover funds and property because she regrets what she has done. Entering a plea today is a significant step toward sending the same message.”

In a December 2019 “fraud investigation report,” Washington State Auditor Pat McCarthy said in a nice way that the housing authority staff was in way over its head. She wrote: “The housing authority should … train employees on how to conduct a meaningful review of financial information, such as journal entries, bank statements, and [wire transfer] payments.”

So it’s not surprising that the housing authority posted this on its website: “Pierce County Housing Authority has been in the news recently due to the illegal actions of a former employee … [P]lease be assured that the ongoing investigation will NOT impact the services we provide. The agency remains committed to the provision of safe, decent affordable housing and economic opportunity, free from discrimination.”

In this matter, Tacoma’s problem is that what happened there, didn’t stay there. Sort of like some of what happens in Vegas.

Campbell was sentenced today in U.S. District Court, Tacoma, to 51 months in federal prison and immediately taken away to start her sentence. She had faced 20 years, but still owes $5.3 million in restitution. The press release that the U.S. Attorney’s Office for the Western District of Washington issued about the sentencing went out of its way to mention that she used purloined funds “for travel including trips to Las Vegas … and gambling.” Vegas always is singled out in cases like this.