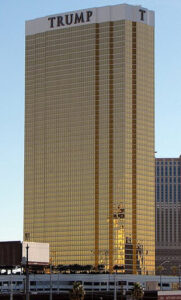 This being the end of December, lists of predictions for the new year are all the rage. For the first time since becoming New To Las Vegas, I’m joining in. But mine are confined to the general region. And the calls I make generally shouldn’t be taken too seriously.

Herewith, my Las Vegas predictions for 2022:

–The Las Vegas Convention and Visitors Authority starts giving every tourist getting off a plane here a free COVID-19 test kit, while unveiling a new marketing slogan: “What tests here, stays here.”

–With the aura of Las Vegas’s organized crime era back in style, the Flamingo Las Vegas installs a second monument on its premises honoring its one-time mobster boss, Bugsy Siegel.

–Another national political scandal breaks, and it turns out some of the co-conspirators plotted in Las Vegas.

–In a major media surprise, the Las Vegas Sun buys the Las Vegas Review-Journal with a loan from local unions and puts the larger paper out of business.

–A Brookings Institution report concludes that the general failure of economic diversification around Las Vegas since the Great Recession using big tax breaks is due to the fact that there aren’t all that many taxes here to give a break from in the first place.

–To help pay for the free COVID-19 tests at the airport, Clark County starts charging tourists $5 each to visit the original “Welcome to Fabulous Las Vegas” sign, which long had been free.

–The trend of outrageous, over-the-top TV ads by braggadocio Las Vegas personal injury attorneys intensifies when one lawyer, saying he would give “an arm or a leg,” is depicted cutting off his left hand and handing it to a client.

–Las Vegas fails to get an MLB team, but is offered one in pro lacrosse.

–The City of Las Vegas launches new efforts to annex unincorporated Clark County land so it can boost tax revenues.

–Political action committees masquerading as charities–so called “faux charities”– continue to solicit money in Nevada without registering despite a new state law requiring most of them to first file papers with the Nevada Secretary of State’s Office.

–A Las Vegas man jumps into the race for Governor on a platform of having never contracted COVID-19; the candidate is promptly ridiculed as an outsider and withdraws within days.

–The U.S. Senate race turns ugly when leading Republican candidate Adam Laxalt is accused of cheating on tests in second grade in the D.C. area where he grew up, while Democratic incumbent Catherine Cortez-Mastro is forced to defend her style of shoe.

–The giant Hoover Dam springs a leak, but authorities quickly say there’s no worry due to the sharply lower level of Lake Mead from climate change.

–Democrat Steve Sisolak narrowly wins re-election as governor over Republican Clark County Sheriff Joe Lombardo, who is tarnished by a scandal in which, unbeknownst to him, lower-level officials used civil asset forfeiture proceeds to pay for parties.