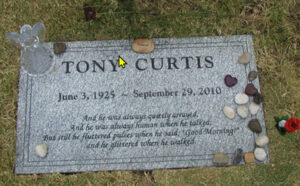 Here’s Part 2 of my journey to the few famous graves of Las Vegas, and the back stories of how they came to be here. As I wrote in Part 1, for such a large and prominent place, the Las Vegas area is the eternal home of a surprisingly meager number of well-known individuals.

I attributed that to the city’s relative youth–barely a century old. To die, you first have to live. A commenter to Part 1, my long-ago Dallas Times Herald colleague Mary Don, further pointed out that the population of Las Vegas only began to explode after home air conditioning made possible Mojave Desert living in great numbers.

Part 1 described the journey to their final resting spots hereabouts of three celebrated athletes. They are heavyweight boxing champ Sonny Liston, baseball pitcher (it would be a stretch to call him a star, but everyone knew his name) Bo Belinksy, and once-dominant tennis competitor Pancho Gonzales.

From the New To Las Vegas world headquarters, I repeat again my belief that Vegas has a fatal attraction for a certain kind of celebrity. So today I tell the stories of two prominent performers. This is part of an occasional series.

The biggest name buried hereabouts likely is movie actor Tony Curtis. He had a six-decade career on screen and TV playing all kinds of characters. But much of his fame stems from a series of roles in the 1950s: a famous magician in Houdini, a morally compromised P.R. man in Sweet Smell of Success, a desperate escaped prisoner in The Defiant Ones, and, most notably, a cross-dressing musician ducking the mob while wooing Marilyn Monroe in the wildly funny Some Like It Hot.

Born Bernard Schwartz in 1925 into a struggling New York Hungarian-Jewish family, Curtis was headed as a kid for a life of crime until a family friend helped set him straight. After a stint on a Pacific Ocean submarine tender during World War II (he watched the Japanese surrender in Tokyo Bay a mile away through binoculars), he studied acting. In 1948 he relocated to Hollywood, changed his name and soon hit it big as a classic good-looking leading man.

Vegas coursed through his career. Curtis’s first speaking role was as a Las Vegas bellboy in the 1949 film noir The Lady Gambles. He was frequently photographed partying at the Sands. When Caesars Palace opened on the Las Vegas Strip in 1967, Curtis spent a month there hosting a live variety show for ABC. In 1978, he played casino mogul in the TV series “Vega$.” At a 1990 roast at the old Desert Inn in Las Vegas for mob lawyer (and later Las Vegas mayor) Oscar Goodman, Curtis brought down the house with this line:  “I don’t know what I’m doing here. I haven’t killed anyone.”

With alcohol and drugs slowing his acting career, Curtis, age 75, and his sixth wife, Jill, relocated in 2000 from Los Angeles to a nice spread in suburban Henderson. With his big personality he quickly became a popular figure on the Las Vegas social scene. A mere four months later, he told the Las Vegas Review-Journal, “I feel like a Las Vegan. I felt a part of it immediately after I arrived.” The personable Curtis fashioned a second career as a noted artist, supported cultural causes and starting an abandoned-horse sanctuary south of town. He wrote two memoirs. In 2004 Curtis became the second person inducted into the UNLV College of Fine Arts Hall of Fame. A street in his new home town was named for him.

Long plagued with a variety of ailments, Curtis died at home of a heart attack on September 29, 2010 at age 85. His funeral a week later was one of the biggest such events ever held in the recorded history of Las Vegas. Hundreds of persons–celebrities, ordinary folks, persons dressed as Marilyn Monroe and Elvis Presley, and TV crews from around the world–jammed the one-hour service, which was broadcast to overflow venues nearby. Speakers included actress Jamie Lee Curtis, one of his two daughters with Janet Leigh (Curtis had four other children with other wives); and then-California Governor Arnold Schwarzenegger.

Curtis’s casket was so full of personal mementos it’s amazing there was room for the body. Here’s the inventory courtesy of Grunge.com:

[S]ome of his favorite clothing, including white shorts and sweater, an Armani scarf, and a Stetson hat under his arm … [I]n a travel bag buried with him … family photos, medals he won in the Navy, his grandson’s baby shoes, a yarmulke … a model Trans-Am, sketch pads, paints and paintbrushes, sunglasses, his dog’s ashes … stones he collected while traveling, several watches, a tablet of Percocet, a DVD of clips from his favorite movie … an eye mask for sleeping, his iPhone … and seven packets of Splenda.

Curtis and his luggage is buried in Palm Eastern Cemetery, 7600 S. Eastern Ave., in an expansive plot with the address of Legacy, Space PG10, row 3. The inscription on his memorial is–oddly, in my view–taken from “Richard Cory,” a poem written in 1897 by future three-time Pulitzer Price winner Edwin Arlington Robinson about a rich man who commits suicide. Reads the inscription, “And he was always quietly arrayed, And he was always human when he talked, But still he fluttered pulses when he said, ‘Good Morning,’ and he glittered when he walked.”

Also in Palm Eastern is the final resting spot for another famous entertainer, but one who later years in Vegas were not quite as comfortable: comedian Redd Foxx. He rose to fame as a raunchy, scatological, sharp-witted stand-up comedian during the civil-rights-battle era of the 1950s and essentially invented the stand-up comedian record album. Foxx became even more prominent in the 1970s as the expressive star of TV’s “Sanford and Son,” a Black sitcom version of “All in the Family”–both developed by Norman Lear–in which Foxx played a racy junk dealer in the Watts neighborhood of Los Angeles. To make a comedic point, he sometimes would feign a heart attack.

Born in 1922 as John Elroy Sanford–a last name he would use for his famous TV series–he was raised in Chicago. In his teens he got his start in entertainment by forming a wash tub band with friends that toured the Midwest. The performer got his stage name after the future Malcolm X called him “Chicago Red” due to his reddish hair while others called him Foxy, although some accounts say it was a homage to baseball star Jimmy Foxx.

As Foxx’s stand-up career took off as a Black man with appeal to white audiences, he started performing in the 1950s in Las Vegas. Eventually, he eventually moved here from Los Angeles. Foxx was a frequent guest on TV talk shows, adding to his fame.

But his personal wealth–he reportedly made as much as $4 million a year–suffered from bad management and an extravagant lifestyle coupled with extensive drug use likely nurtured in socially permissive Las Vegas. “Mostly [his fortune] went up his nose,” one blogger wrote. “The comic made no secret of his love of cocaine, wearing a gold coke spoon around his neck and openly doing drugs on the set.”

Three expensive divorces (he was married four times, twice in ceremonies along the Las Vegas Strip, including his last in July 1991 to Kaho Cho of Korea) didn’t help. He filed for bankruptcy in 1983 but owed the IRS so much in unpaid taxes that the feds in 1989 raided his ranch-style house he had built in 1969 at 5480 S. Eastern Ave. They took seven cars, a dozen guns and all his jewelry, leaving just the house and his bed. The property, now a real estate office, sometimes has popped up on local lists of haunted houses.

On October 11, 1991, just two months after his last marriage, Foxx was on the Los Angeles set of a new TV series, “The Royal Family,” when he collapsed. Some present thought Foxx was faking another heart attack. But this one was real, and fatal. He was 68 years old.

Foxx was so broke that entertainer Eddie Murphy–who in many ways followed in his footsteps–paid for the funeral. Foxx’s body was returned to Las Vegas, where it was laid to rest at Palm Eastern in the Devotion Section, lawn space 4091 311 G, near the main entrance. “You are my heart always” reads the inscription on the memorial.

In the top left corner is the image of the head of a red fox.