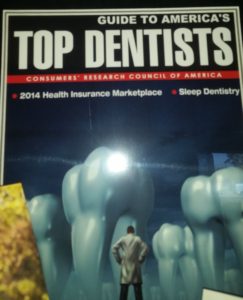 As someone New To Las Vegas, I’ve had to get a new set of medical professionals to help keep me alive and functioning: doctors, specialists, dentists and the like. So it pains me to report this. On the walls of offices and waiting rooms I keep seeing laudatory plaques and literature issued by a shadowy ratings group with a misleading name and banal standards set up by a California trophy maker for, it seems, the purpose of selling overpriced plaques.

The group calls itself Consumers’ Research Council of America. Now, if you get that confused with Consumers Union, the publisher of the highly respected magazine Consumer Reports, it’s probably no surprise. And if you think the address Consumers’ Research Council of America lists on its website of Pennsylvania Avenue NW in Washington just four blocks from the White House is a prestige location, think again: It’s simply a mail drop at a UPS store. And don’t bother calling the phone number on the home page either. It is answered by a tape that won’t take a message.

The image elsewhere on this page is that of a hanging on the waiting room wall of a Las Vegas dentist I mercifully will not name. It’s far from the first Consumers’ Research Council of America “endorsement” I have seen around Sin City.

Consumers’ Research Council of America operates nationally. For proof, try my little Google search trick inserting any city in the country you want.

The reason I know something about this is that I wrote up Consumers’ Research Council of America and its m.o. in 2009 for Forbes.com. You can read that story by clicking here. From my further research, it doesn’t seem that things have changed too much.

Consumers’ Research Council of America remains a stalking horse for a Southern California company called S L D Industries, which manufactures the plaques. It’s a simple business model, actually. The doctor gets a letter saying he or she has been named one of America’s Top Dentists (or Top Family Doctors, or Top Surgeons or Top Ob/gyn’s or one of 25 health-care categories). The mailing then offers for sale a variety of fancy plaques and trophies commemorating the honor at a cost of up to several hundred dollars. The hardware can be put in medical offices to impress patients.

The problem with all this is that there’s little solid evidence that those individuals so honored really are at the very top in their professions. They might be, and some probably are. But the Consumers’ Research Council of America stated rating criteria provides small comfort.

The language on criteria for Top Dentists is similar to that of the other professions.  It says that “points” are awarded for four factors that easily can be found on Internet databases: years in practice, education and continuing education, board certifications if any, and membership in professional associations. That’s it. Enough points, and the professional apparently is on the list.

The printed criteria does not say how many points are needed, or what percentage of a given field is considered “top.” There are indications the bar is not very high.

There is no peer review. The designation does not take into account disciplinary actions, lawsuits, malpractice claims, judgments, settlements or patient outcomes–you know, factors that a typical patient might want to be considered.

The Consumers’ Research Council of America website contains images for each discipline of what appears to be published books all starting with the title “Guide to America’s Top …” This connotes substance. But the Library of Congress catalog contains none of them, and they’re completely missing from Amazon.com, suggesting they are not even published as an e-book. Nor are the various guides registered as trademarks with the U.S. Patent and Trademark Office. That suggests how little value there really is to the lists.

The council’s website has a rudimentary search engine in which a given doc’s name can be entered for verification. But it’s not possible to use that search function to find out all “top” docs in, say, a given zip code. I entered a few names in succession and was quickly locked out, being told, “Your search quota has been exceeded. Please try again later.” So the site and its intellectual property is of pretty limited use in actually finding a pro. To me that’s simply more evidence the main purpose is to sell plaques.

Consumers’ Research Council of America also generates lists of non-medical specialties, including financial planners, accountants and real estate types. I first heard about the organization in 2009 when skeptical financial planners who had gotten plaque solicitations sent me the literature they had received. The package included a letter from James R. Wentworth, identified as the president of S L D Industries. In fact, there was no James R. Wentworth; S L D Industries admitted in a Minnesota trademark infringement lawsuit it lost (over rights to a best-lawyers list) that Wentworth was a “pseudonym.” I guess it was a nice bland generic name that wouldn’t offend anyone. The president then and now of S L D Industries, according to California corporation records: one Alfred Von Kessler. He really does exist, so much so that, according to Los Angeles federal court records, he filed for personal Chapter 7 bankruptcy in 1996.

As for Consumers’ Research Council of America, one business database I found in 2009 suggested it had just five employees. If true, that would hardly seem to be sufficient staffing to vet tens of thousands of medical and other professionals on a continuing basis. In any there, there is little accountability. Aside from the nonexistent headquarters and the non-functioning telephone number, no one is listed publicly as the boss.

The whole operation has had some serious quality-control problems. Soon after my story appeared, Allan Roth, a financial planner in Colorado Springs, reported that his pet dachshund dog Max Tailwager had received a top financial planner plaque. Roth had returned paperwork sent him, writing in his dog’s name along with a check for $183 to show how sketchy the rating system was. An angry but–no surprise–unsigned Consumers’ Research Council of America email said Roth committed fraud in boosting his canine associate and demanded Roth return the plaque to S L D Industries, more evidence of the close relationship between the research council and S L D Industries. But then the Colorado securities commissioner said he approved of Roth’s ploy, and the matter went nowhere.

This week, Roth told me he still has the plaque, as well as Max, who is now eight years old. “The honor really helped his self-esteem,” Roth chuckled. Somewhat bizarrely, given the Consumers’ Research Council of America’s assertion that Roth acted improperly, Roth’s name still comes up in the online search engine for Top Financial Planners (Max’s name does not). The Consumers’ Research Council of America website carries this poorly worded warning about ordering the very plaques it solicits folks to buy: “Any person falsifying, misrepresenting themselves, intentional deception, intentionally using or putting a different name on the order form other than that who it was originally selected and mailed to will be prosecuted to the fullest extent of the law.”

In 2012 ABC News reported that Conrad Murray was listed by the Consumers’ Research Council of America as a top cardiologist despite his conviction for administering that lethal dose of propofol to singer Michael Jackson in 2009. ABC News also said that Earl Bradley of Delaware was on the “top pediatricians” list despite serving 14 life sentences following his conviction for serial child rape, and a Kansas surgeon was on the “top surgeons” list despite a dozen malpractice claims.

Since that phone number for Consumers’ Research Council of America in the nation’s capital wouldn’t take a message, I sent a pointed email to the email address on the site recounting many of the the points I am making here and asking for comment. I’ll update this if I hear back.

Until last summer, I lived for five years in Seattle. It’s a major center of high-quality medical care, and I had a lot of docs there, too. But I never saw any Consumers’ Research Council of America-generated material in a medical office. Here in Vegas, though, the plugs seem almost as common as lights on the Strip. More show biz, I suppose.