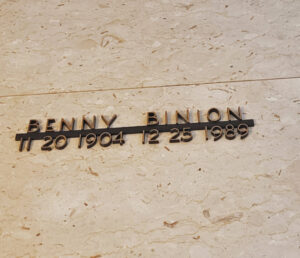 Welcome to Part 4 of my periodic series about the few famous graves of Las Vegas and how they came to be here. Part 1 dealt with athletes: boxer Sonny Liston, baseball pitcher Bo Belinsky and tennis great Pancho Gonzales. Part 2 described entertainers: movie icon Tony Curtis and TV star Redd Foxx. Part 3 concerned the Las Vegas Strip-creating Mob and associates, featuring the only big-name organized-crime boss planted here, Morris Barney (Moe) Dalitz. Plus Phyllis McGuire, the centerpiece of the famous McGuire Sisters singing act who was the girlfriend for 16 years of a famous Chicago mobster, Sam Giancana, who was murdered in his basement.

Let me repeat my operating thesis. Despite the area’s current population topping 2.3 million, the Las Vegas Valley is the eternal home of an extremely tiny number of individuals–by my count, no more than 20–who remain well known to folks outside the local area. I attribute this to several factors. Among them: Las Vegas’s relative youth as a city, being founded only in 1905, and the fact the population grew slowly and was still under 50,000 in 1950. You need a fair number of people dying over a significant period to produce famous graves. Then there’s the possibility that the stigma of Las Vegas for the longest time was such that prominent individuals and their families went elsewhere for that final act of interment. This certainly seems to be true of most local mobsters.

In this segment, I’m focusing on two characters integral to the development of Las Vegas as a gambling mecca with their own connections to organized crime.

Las Vegas long has been called the City of Second Chances. Few individuals proved that better than Benny (Cowboy) Binion. Run out of Texas after operating illegal gambling operations around Dallas–and killing a few folks–Lester Ben Binion arrived in post-World War II Las Vegas as it was becoming the world’s legal gaming capital. He eventually opened a celebrated establishment of his own–Binion’s Horseshoe Casino–started the famous World Series of Poker and became a revered local figure. All the while he jousted with law enforcement and regulators, handicapped by a c.v. listing maybe a dozen killings attributed to him or his henchmen.

Much of my description of Binion’s career is drawn from three sources. The first is Blood Aces: The Wild Ride of Benny Binion, the Texas Gangster Who Created Vegas Poker. The 2014 book was written by Doug J. Swanson. In a previous incarnation Swanson was a colleague with me on the Dallas Times Herald decades before I became New To Las Vegas. The second is “Benny and the Boys,” a lengthy 1991 article by Gary Cartwright in Texas Monthly (another outlet I did work for). The third is The Green Felt Jungle, the best-selling 1963 Vegas tell-all by Ed Reid and Ovid Demaris that still rattles some local casino cages.

Born in 1904 in rural north Texas near the Oklahoma border, Binion had no school education–it’s not clear to me he ever learned to read properly–giving him plenty of time as a youth to dabble in gambling and crime. His arrest record started before he hit 20. After moonshining during Prohibition, Binion relocated to Dallas where he became king of the numbers rackets while operating equally illegal private dice game parlors. Killing rivals–sometimes he pulled the trigger, sometimes his hitmen did, when they weren’t using bombs–helped him gain market share. But then the Chicago Mob moved into Dallas, vying with Binion, and local officials hostile to him won election. Seeing what was coming, Binion in late 1946 relocated to Las Vegas. He made the 1,200-mile drive in a Cadillac with $1 million cash in the trunk and two machine gun-toting bodyguards. His wife and five children soon joined him.

After buying into two casinos and encountering operational problems, Binion unloaded his interests and in 1951 acquired his own casino and adjoining hotel on Fremont Street, which he rechristened with the Binion name. His gimmicks–high limits on bets, free drinks for customers, a display of $1 million behind glass in the lobby, not much in the way of entertainment, and later, the World Series of Poker–drew a big following. Binion also did business with other mobsters pouring into Vegas. He arranged financing for some from his Dallas contacts, while other organized crime types likely had hidden interest in the Horseshoe. In his 1973 oral history on file at the University of Nevada, Binion praised the likes of Vegas mobsters Dalitz, Benjamin (Bugsy) Siegel, Willie (Ice Pick) Alderman, David Berman and Gus Greenbaum.

Seven years after arriving in Vegas, Binion in 1953 pleaded guilty to tax evasion charges in Texas stemming from his Dallas days, and served 3½ in federal prison. He parked his ownership interest in the Horseshoe with a crony. It was not until 1964 that his family regained full control. Binion himself, having lost the right to run a casino in Nevada, assumed the title Director of Public Relations, although it was widely assumed he, ah, called the shots. A few more dead bodies surfaced, too. After financial reversals, the Binion family in 2004 lost control of the Horseshoe and the family name as related to gambling.

That was 15 years after the Cowboy died of heart failure on Christmas Day 1989 at age 85, even as the feds were mounting yet another investigation of him. A thousand mourners–from celebrities and gamblers to common citizens–crowded the church for his funeral, where Binion’s cowboy hat sat atop his coffin. A procession led by the Horseshoe’s ceremonial stagecoach went to Bunkers Eden Vale Memorial Park, 1216 N. Las Vegas Blvd N, not a mile-and-a-half north of the Horseshoe. Binion was laid to rest in a couch crypt bearing simply his name and dates of birth and death just inside the Chapel of Eternal Peace. That’s a grand mausoleum facing the cemetery’s main gates containing hundred of bodies, including that of Binion’s son, Ted Binion, who had his own mob entanglements and died under mysterious circumstances in 1998 at age 54. History has not been kind to this part of town. A sign on the mausoleum entrance today says, “Please remember to lock the door behind you to keep you and your loved ones safe!”

If Binion got his second chance in Vegas, Nick the Greek got hundreds of them here. They came as part of a 60-year career that easily made him the world’s most famous professional gambler. It was said that Nicholas Andreas Dandolos–his full name–during his lifetime won $500 million. His problem was that during his lifetime he also lost $500 million–or maybe $501 million.

He was born on the Greek island of Crete in 1883 or 1884, although after becoming a celebrity he falsely would say for the longest time he was born a decade later. The son of a prosperous rug merchant, Dandolos claimed to have graduated from a Turkish college with a philosophy degree. He moved around the turn of the century to Chicago, where he became a U.S. citizen, and then to Montreal, where he started betting on horse races and gaining a reputation.

Dandolos returned to Chicago where he expanded into dice, cards and other table games. He traveled in mob circles–counting as friends Chicago gangster Al Capone and New York racketeer Arnold Rothstein. According to Nick the Greek: King of the Gamblers, a 1969 authorized biography by Cy Rice based largely on Dandolos’s recollections, New York mobster Dutch Schultz in 1935 gave Dandolos for safe-keeping a suitcase containing an astounding $5 million in cash. When Schultz was murdered a few months later, Rice wrote, the money became Dandolos’s. Like much written about Dandolos’s life, this has not been confirmed. A high roller who never married, Dandolos moved easily about the country, especially to both coasts. His exploits, such as offering to bet $500,000 on a single draw of a card, gained wide attention along with his glamorous lifestyle squiring about beautiful women and his ability to generate pithy, philosophical quotes on gambling and life for inquiring journalists.

Nevada legalized casino gambling in 1931. Dandolos became a frequent visitor to the state and in 1943 took up residence in Las Vegas, although his home was a single room in the Hotel Last Frontier. He became a Chamber of Commerce-like champion for the glories of Las Vegas as he engaged in epic gambling sessions, some one-on-one lasting for weeks. Dandolos developed into a marquee draw for casino owners, who knew that Nick the Greek’s presence in the house would bring in a crowd of hot-to-bet gamblers. He resisted offers from Dalitz, Binion and others to be cut in on their action as an owner investor, saying he preferred to remain independent. Given the mob-directed skimming of profits to avoid taxes taking place at many Las Vegas casinos, this was a good move for the Greek personally, if not financially.

Still, in 1963 Dandalos was named an un-indicted co-conspirator in a successful federal prosecution of several mobsters with Las Vegas ties. The charges: They extorted $60,000 from oilman/gambler Ray Ryan. He supposedly had cheated their buddy Dandalos out of $550,000 in a long gambling session at a mobbed-up Las Vegas hotel in 1949 that had cost the Greek much of his net worth. Both Dandalos and Ryan testified at the trial, which resulted in some long prison sentences. In 1977 Ryan died in Evansville, Ind., from a massive car bomb in what clearly looks like a case of mob revenge. The murder remains officially unsolved to this day.

But Ryan’s death couldn’t be pinned on Dandalos. He had died more than a decade earlier, in 1966 on Christmas Day (as Binion would years later) from complications after a heart attack. Depending on who’s talking, Dandolos was age 82 or 83. The Ryan debacle of 1949 apparently had started a long decline that left Dandolos financially strapped and unable to obtain the casino credit he needed to bet. He eventually left Las Vegas, moving to the Los Angeles area. While frequently visiting Las Vegas, he came to eke out a living gambling in small-limit poker games in the Los Angeles suburb of Gardena. At the time of his death Dandolos was living “quietly,” as The New York Times obituary put it, in a Beverly Hills hotel.

In death Dandolos was gone, but in Vegas, which he had helped put on the gambling map, definitely not forgotten. The “legendary prince of players,” the Las Vegas Review-Journal declared. Friends paid for an elaborate send-off–or, more accurately, a bring-back. After a service in Los Angeles, a gold Cadillac funeral coach drove his body to Las Vegas. A standing-room-only crowd at downtown’s St. John the Baptist Greek Orthodox Church that included TV host Ed Sullivan heard Dandalos described (by Las Vegas Sun owner Hank Greenspun) as someone who “gambled because he loved it … it was his life … his constant companion … his need.” Pallbearers, real and honorary, included Binion, Dalitz, entrepreneur Kirk Kerkorian, Nevada Governor Grant Sawyer, assorted other officeholders, and even lawmen. Several FBI agents nearby discreetly observed the proceedings. It was perhaps the first big celebrity burial in the then-61 year history of Las Vegas.

Dandalos was laid to rest in Las Vegas’s oldest burial ground (but still a good two decades younger that he was), the city-owned Woodlawn Cemetery, 1500 Las Vegas Blvd. N. His marker, in Section K, Plot 217, was simple. “Nick the Greek,” it reads. “Gambler and Sage.”