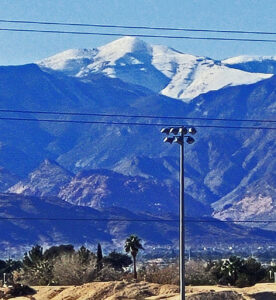 Sitting as it does in the Mojave Desert of southern Nevada, less than 300 miles from Mexico, the immediate Las Vegas area has pretty mild winters, with no snow most years. Except for this: A scan of the mountainous horizon surrounding the Las Vegas Valley shows one–and only one–snow-capped peak easily visible from the Las Vegas Strip. It actually stays white more than half the year well into the warm late spring and is rather noticeable. Tourists wearing T-shirts are amazed as they waddle from casino to casino.

I’m talking about Mount Charleston, or, as it’s officially called, Charleston Peak. Just 30 miles to the northwest, the 11,916-foot-high federally owned pinnacle–nearly two miles above the Strip and the highest point in southern Nevada–is a subject of mystique and myths.

As is so often the case about Las Vegas, both mystique and myths are interesting.

Foremost among the myths involves the near-legendary John C. Frémont (1813-1890). He’s the 19th Century military adventurer, explorer, politician, self-promoter and war criminal for whom a lot of things in the West are named, including Las Vegas’s original gambling district of Fremont Street. It often has been written that Frémont was the first gringo to climb Mount Charleston, and that he also renamed it (the local native American name was Nuvagantu, literally “where snow sits”) for Charleston, S.C., where he spent a part of his childhood.

According to Frémont’s own journal of his travels, published in 1845 by the U.S. Senate–in which his father-in-law conveniently sat–Frémont and his horse-mounted exploratory military unit had been traipsing around the West for nearly a year. On May 2, 1844, heading east from near the border of California, they followed roughly what is now the route of State Highway 160. They started crossing the Spring Mountains–of which Mount Charleston is a part–and likely spent that night at Mountain Springs, a pass about 15 miles southeast of Mount Charleston.

The next day, May 3, after what Frémont wrote was a journey of 18 miles, his team spent the night in “a camping ground called Las Vegas.” This would not have been physically possible with a side trip over Mount Charleston, which probably was still snow-covered and not exactly the easiest route, especially for horses.

Frémont’s only description of then-unpopulated Las Vegas was contained in a single paragraph of his journal: a marshy plain with two springs producing water “rather too warm to be agreeable” but affording “a delightful bathing place.” It is believed to be the only night of his life Frémont spent in Las Vegas. Early the next morning he and his unit headed off to the northeast toward Utah. They roughly followed the route of the future Interstate 15, itself paralleling the Old Spanish Trail, which Frémont didn’t discover but definitely publicized through his writings.

As for the new moniker, Nuvagantu was renamed Charleston Peak around 1870 by the head of a U.S. Army surveying party who was from Charleston. The naming had nothing to do with Frémont, who, for what it’s worth, had been expelled from the College of Charleston for cutting too many classes.

For decades, Las Vegas remained an empty area. In 1900 the population (of non-Indians, anyway) was all of 18. You can see every single name on a single enumeration page of the U.S. Census by clicking here. But that soon changed. Corrupt mining magnate William A. Clark willed Las Vegas into existence on May 15 and 16, 1905, by selling 1,200 lots around his planned railroad station on the line he was building from the port of Los Angeles through the desert to Salt Lake City. Clark’s trains would need the same water that drew Frémont’s attention.

Mount Charleston’s mystique has a lot to do with its status as the only easy-to-see snow-capped peak in the area from that hot house known as the Strip. Indeed, it is the country’s 19th most prominent mountain, as defined by its summit elevation relative to its surrounding terrain.

Still, the mountain doesn’t dominate the Las Vegas horizon in the way that, say, 14,411-foot-high Mount Rainier looms (on a rare clear day) over Seattle, where I lived immediately before becoming New To Las Vegas. One reason here is much of the view of Mount Charleston from Las Vegas is blocked by other lower mountains of the Spring and Red Rock ranges. But what is seen is the snowy top in a peek-a-boo–and haunting–manner. (Southern Nevada’s only ski lifts are at Lee Canyon Ski Resort, essentially a far side of Mount Charleston.)

Then there is the November 17, 1955, crash during a blizzard near the mountain’s peak of a C-54 Military Air Transport Service plane that killed all 14 persons onboard. The mountain was immediately cordoned off and information about the crash marked classified, prompting all kinds of wild rumors. More than 40 years later, the truth finally came out: The flight was taking scientists, engineers and technicians from southern California to nearby super-secret, spooky Area 51–and not to another location as the Air Force claimed back in 1955–to work on development of the U-2 spy plane. Remains of the crash can still be seen by hikers. In 2016, the Silent Heroes of the Cold War National Memorial was opened at the Spring Mountain Visitor’s Gateway campus on the paved road toward Mount Charleston.

Indeed, it’s possible to drive from Las Vegas to an elevation of about 7,700 feet using that paved road to the resort village of Mount Charleston. From a trailhead near there, a hardy hiker can hoof to the peak with its breathtaking views and back in eight-to-12 hours. It is a popular, albeit difficult, journey even for those in shape, and the trip is prone to sudden and unpleasant changes in weather.

The village itself is a getaway for Las Vegans, especially in the blistering summer, since the temperature is usually 30 degrees cooler. A fire last September not blamed on foul play destroyed the restaurant of the Mount Charleston Lodge, a beloved half-century old eatery. Its owners say it will be rebuilt.

When the average daily highs in Las Vegas reach the upper 80s in May, Mount Charleston itself still will be snow-capped. Part of the mystique, and no myth.