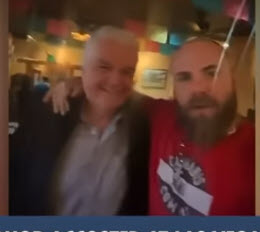 Screenshot from confrontation between Steve Sisolak (left) and Justin Andersch

It’s been five days since Nevada governor Steve Sisolak and his wife were accosted by a right-wing conspiracy pusher at a popular Las Vegas restaurant. With a cell phone camera running, he unleashed a string of profanities/racial taunts and declared, “We could string you up by a lamppost right now,” in a clip quickly posted on social media.

Now Sisolak, a moderate running-for-reelection Democrat so low-key he often travels around Nevada without security, suddenly has become one of the world’s most famous elected officials, at least for 15 minutes.

Okay, he’s no Biden, or even Putin, in terms of coverage. But a Google search for “Steve Sisolak and wife” returned 12,000 hits in the past week about the incident, many of them reprints of news accounts by the Associated Press. The far-flung outlets have included newspapers, TV stations, magazines (i.e. People) and websites across the country and in a number of foreign countries, including the U.K. and China. One YouTube clip of the incident has drawn nearly 15,000 views.

“Nevada governor threatened while dining in Las Vegas,” screamed a headline on the English-language website of the official Chinese outlet Xinhua. “Nevada governor and his wife accosted at restaurant by men shouting ‘racist threats,’ ” declared The Guardian of London. “Social video shows ‘racist’ taunts of Nevada governor, wife,” proclaimed a headline on the website of the Albany (NY) Times Union. (Sisolak’s wife, Kathy, was born in a rural Nevada city to Chinese parents and worked in public finance before marrying Sisolak after his election in 2018.) I’ve been asked about the incident by friends from distant places I lived in before becoming New To Las Vegas.

In my view, the episode says more about how the media works than it does about how politics works, and not just in Nevada. But that could change as we get closer to the November elections in which Republicans challenging incumbent Democrats are going to try to make COVID-19 the No. 1 issue.

In the screenshot posted here, the man in the red shirt subsequently identified himself at a press event, during which he declined to apologize, as one Justin Andersch. He was wearing a T-shirt reading “Cannibus and Combat,” which is also the name of a blog he operates supporting far-right anti-government conspiracies. In the clip, made on Sunday, February 27, he gets up from a table in the Lindo Michoacan restaurant in the Summerlin section of Las Vegas, asks the arriving Sisolak for a selfie, then starts unleashing a series of epithets and slurs. The governor can be seen mouthing the words “Let’s go” to his wife. Andersch and another man follow them out the door, recording all the while, taunting Sisolak for having no security, and discussing the propriety of lynching.

A hulking figure blessed with a dignified but friendly demeanor, Sisolak, 68, showed admirable restraint in biting his tongue and simply leaving. One gets the impression watching the clip he wanted to deck Andersch, and probably could have. Sisolak first met his wife at the local gym where they regularly worked out.

On Tuesday, Andersch read a six-minute-long statement at his lawyer’s office declining to apologize for his strong language. He said his grievance with Sisolak had mainly to do with state policies enacted during the two-year-long pandemic, which included shutting nonessential businesses for a time. Andersch said he lost his job due to the policies, which he called “authoritarian.” He added he was merely standing up for his beliefs in confronting Sisolak.

But Andersch hypocritically tried to have it both ways. He clearly was responsible for publicizing the incident. Yet Andersch complained during his statement (after which he took no questions), ““Why is it front page news for me to confront an elected official in a public place?”

There’s a one-word answer to that, which I’ll tell him (and you): video. Without that visual clip, there would be no story for the media to pick up on ad nauseam. If a picture is worth a thousand words, a video is worth a thousand stories. It’s just that simple.

State authorities say they are investigating the incident, but I’d say Andersch’s speech is probably protected here by the First Amendment–although not by much. Undoubtedly, Sisolak and his advisors are mindful of the fact that a Las Vegas judge in November dismissed the last of three charges against Steve Feeder. He was another Sisolak COVID-19 critic who had posted on Sisolak’s own official Facebook page, “The TYRANT has declared WAR on the people and like Hong Kong protestors we need to arm ourselves and form a militia and fight back.”

Don’t remember that case? No video.

Of course, the restaurant incident also plays into the our present-day strident, polarized politics, in which the way opposition is expressed almost seems to be more important that the policy position being debated. This is a theme often found in coverage of U.S. politics by foreign journalists who seem to view the whole country as the Wild West. I suppose you could call some of this marketing, but the result is making it difficult to find common ground on a lot of issues.

Against Sisolak, there are 10 Republicans currently running in the GOP primary. To varying degrees they also are vying for the endorsement of Donald J. Trump, who despite owning half of the state’s tallest non-casino building has never won any electoral votes in Nevada. The most recent public polling, from late January by The Nevada Independent, shows Sisolak with a narrow margin in a theoretical head-to-head match-up over the two perceived GOP front-runners, Clark County Sheriff Joe Lombardo and ex-U.S. Senator Dean Heller. Nevada is a mail-in-friendly state (everyone gets sent a ballot), in which Democrats hold a 34% to 30% registration edge over Republicans (the other 26% are mainly independents, with a few fringe party members).

So the race probably is Sisolak’s to lose. The GOP apparently will try to make hay of things like the fact that early in the pandemic he ordered most houses of worship shut while allowing liquor stores to stay open. Now I’d tell you there are more chuggers than church-goers in Nevada, but maybe the faithful vote in higher percentages. Still, who knows what kind of a videotaped incident could be, ah, ginned up outside of a holy place to capture the media’s attention? Stay tuned.